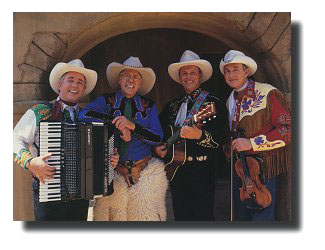 Riders In The Sky continue to celebrate their 25th anniversary of performing with the launch of their “Silver Jubilee Tour” on January 10 in Mobile, Alabama. The quartet, known as the world’s premier comedic western group, carries the torch passed on by artists like Roy Rogers and Gene Autry while adding their own brand of wacky humor and western wit. Recently named The Western Music Association’s “Entertainers of the Year,” the Riders are excited to hit the road for their “Silver Jubilee Tour.”
"The best part of it is that it has still stayed so much fun,” says author, and ethnomusicologist Ranger Doug, “How great to be preserving a piece of Americana, while still having the time of our lives!"

"People often ask us how we keep it fresh, night after night", adds bespectacled bass player Too Slim. "I always think about the cowboy following the herd…the view is always different, and always the same!"

Over the years the Riders have played close to 4,700 shows, logged over 2.8 million miles on the road, made appearances in all 50 United States and in nine countries. They’ve driven seven vehicles past the point of recognition, used over 210,000 gallons of fuel, spent over 6,000 hours on stage, received an average of 49 yucks per show, yodeled over 35,000 times, signed over 815,000 autographs and left Too Slim behind seven times.

The Silver Jubilee celebration kicked off in Las Vegas last month with a roast and tribute in their honor at the 14th Annual Western Music Association Festival & Awards Show. The roast was highlighted by appearances from Tommy Smothers, Ray Benson of Asleep at the Wheel and original Dixie Chick Laura Lynch, video greetings from Penn & Teller, Marty Stuart, Connie Smith and Little Jimmy Dickens and a letter sent by President George Bush. In addition to winning the “Entertainer of the Year” honor at the awards ceremony, the group was also recognized for their album “Riders In The Sky Present A Pair Of Kings” winning “Traditional Western Album Of The Year” and Joey was named “Instrumentalist of the Year.” Currently the Riders are working on a new two-CD box set featuring 25 brand new arrangements of classic Riders In The Sky songs along with a handful of new offerings.

Riders In The Sky itinerary: