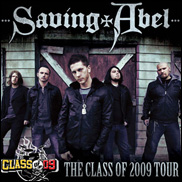 CORINTH, MS (CelebrityAccess MediaWire) — Rock band Saving Abel has announced they will be cutting the Class of 2009 tour short, removing the final week of dates from the group’s itinerary. Saving Abel was forced to cancel three recent appearances in Michigan due to the hospitalization of front man Jared Weeks. A nasty mix of diabetic shock and the flu parked the singer in the hospital for a number of days. The tour resumed in last Monday, but after one week of performances, the prudent decision to give Weeks the opportunity to have an insulin pump inserted in to his body immediately has been made.

The announced Class of 2009 shows from Orono, Maine on November 30 through Atlanta on December 8 are cancelled. The band will perform in Nashville on December 18 and Memphis on New Year’s Eve.

Saving Abel is the first act in over three years to have three top five rock hits off their debut release. The band’s debut singles” Addicted,” “18 Days,” and “Drowning (Face Down)” have delivered a massive fan base for the Corinth, MS. quintet. Saving Abel’s biggest hit “Addicted,” was a #1 rock hit, crossed over to peak at #7 on Billboard’s Top 40 Airplay Chart and also sold over a million downloads. –by CelebrityAccess Staff Writers