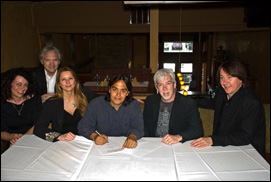 LONDON CelebrityAccess MediaWire) — Simon Lynge, who hails from Greenland has signed with the London based Lo Max Records and has begun extensive touring in the UK and Scandinavia leading up to the release of his record.


Called A Beautiful Way to Drown when released by Bright Orange Records in the U.S., the recording will have its name changed to The Future and will be released in the UK in February, 2010. It was co-produced by Matt Forger (Michael Jackson, Paul McCartney) and Jon Maddox (The Young Dubliners). It features such stalwart musicians as Lee Sklar (James Taylor, Jackson Browne), guitarist Shane Fontayne (Bruce Springsteen, Paul Simon), and bassist Freebo (Bonnie Raitt, CSN).

The promotion has begun with a release of the single Infinitely You in November, another single in January and then the full CD release.

In addition Simon is already touring the UK as Special Guest to Jon Allen, whose tune "In Your Light" has had strong radio play in England.

According to Lynge's managment, Yes Dear Ent., the October/November dates are designed to introduce Simon to UK media prior to the release of "Infinitely You". Combining Simon's solo work with his Jon Allen spots he will do 25 dates mid-November, including a party in his honor on Nov. 2 in London.