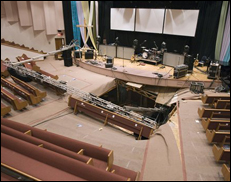 ABBOTSFORD, BC (CelebrityAccess MediaWire) — Two sisters who were injured when the floor of an Abbotsford church collapsed during a Christian rock concert have filed suit against the B.C. Conference of the Mennonite Brethren Churches the the promoters behind Christian rock band Starfield, United Productions of Ontario, the Canadian Press reported.

18-year-old Jennifer Williams received claims to have hurt her left arm, along with bruises, abrasions and suffered nervous shock. Her 17-year-old sister Sarah suffered traumatic brain injury and a concussion along with other damage in the collapse. In all, 40 people in the crowd, consisting mostly of teens were injured in the fall into the basement after the floor collapsed.

In the suit, the sisters contend that event organizers failed to act on warning signs that the floor may be unstable and as a consequence, they are seeking general and special damages, "in trust" damages and court-ordered interest and costs. – CelebrityAccess Staff Writers