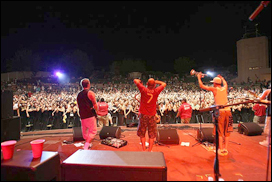 TARZANA, CA (CelebrityAccess MediaWire) – Party band, Slighty Stoopid, was one of the few artists who played to SRO crowds, selling more than 95% of the tour's available tickets, and they hope to achieve similar success with their North American Fall tour that kicks off October 8.

The seven-week trek will feature a number of highlights, including a slot on the Austin City Limits Music Festival, playing Canadian dates for the first time in awhile, and headlining the December 6 finale in the concert series celebrating the reopening of the renovated Hollywood Palladium, the iconic club that first bowed in 1940.

For these dates, Slightly Stoopd will supported by Lafayette, LA's Outlaw Nation whose new album is set for a 2009 release on Stoopid Records. Opening the show will be Stoopid's very own in-house DJ, DJ Unite.

Stoopid founders Miles Doughty and Kyle McDonald, who share vocal/guitar/bass duties, will be joined by Ryan "RyMo" Moran on drums, C-Money on trumpet and keyboards, saxophonist De La, and Oguer "OG" Ocon on congas, percussion, harp and vocals. The band may not be all over the radio or on MTV, but this self-contained, reggae/blues/psychedelic rock/hip-hop/punk band has the jam-band, extreme sports and surf/skate worlds wired.

The band first gained notoriety when they were still surfing, skating and attending high school together in Ocean Beach, California, and the late Brad Nowell of the band Sublime signed them to his Skunk Records. Stoopid's first album was released in 1996 and has become a highly sought after collector's item by Sublime fans due to Nowell's appearance on a hidden track. While the Stoopid line-up has shifted over the years, the constants are childhood friends McDonald and Doughty. Since the early days, Slightly Stoopid has worked hard, playing more than 200 shows a year to build a strong and loyal fan base. They also turned down major record label deals in favor of retaining full control over their careers, and with more than a half-million records sold, that's proven to be anything but Stoopid.

Slightly Stoopid's North American Fall tour is in support of their latest release, "Slightly Not Stoned Enough to Eat Breakfast Yet Stoopid," which was released July 22 on the band's own Stoopid Records, and boasts b-sides, rarities and other previously unreleased outtakes as well as eight new studio tracks.

The CD keeps the chain intact of Slightly Stoopid releases that are incredibly stylistically varied, as evidenced by such standouts as an impeccably deep and dubby cover of UB40's "I Would Do For You," the irresistible acoustic jive of "Train 1" and "Train 2," into the classic "Know You Rider" awash with a mishmash of dub instrumental outtakes. But what's bound to catch the eye of many longtime fans is the inclusion of such longtime live favorites as "False Rhythms" and "Sensimilla," both of which are featured as studio renditions for the first time ever, amid new jams such as "No Cocaine" and "Supernatural" which will no doubt keep the band's hardest core fans very happy.

"Those songs, we've been jamming them for years," points out Miles. "'Sensimilla' is a chant-along song with the whole crowd – it's a fun song for all of us to play. When we were recording the album down there [in Miami's Circle House Studios], we had a nice little open jam session. Making 'False Rhythms' and 'Sensimilla' in the studio was cool, because it only took a few takes of playing live, and the songs were done. We got to keep the flavor of the live show in it. That whole vibe in South Florida, we were able to capture it and put it into those jams."

Slightly Stoopid is especially looking forward to playing another round of dates in front of their always-growing fan base, or as they're affectionately known, 'Stoopid Heads.' "They're just maniacs straight-up, and we love them. Without them, we'd just be playing at the bar. They make it worth our while – when we go out and people are having that good of a time, the energy goes back and forth. Just a good time – we just rely on each other's energy."