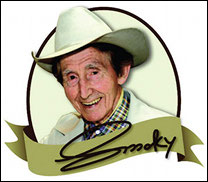 TAMWORTH, Australia (CelebrityAccess MediaWire) — The unveiling of the statue of country music legend Smoky Dawson will be a highlight of the 40th Tamworth Country Music Festival.

Chair of the Smoky Dawson Memorial Committee Mary Chapman said Australia Day was chosen because, not only was Smoky a country music icon, but he was also a great Australian.

Dick Smith AM, an old pal of Smoky’s, will unveil the statue that has been sculpted by Tanya Bartlett, already well known in Tamworth through her statue of the light horse trooper and his Waler in Bicentennial Park as well as other works including the Don Bradman memorial at Bowral.

A plaque beside the statue will commemorate the lives of both Smoky and his wife Dot who, with her creative flair and practical skills, played a major role in Smoky’s extraordinarily varied and successful career.

Mrs. Chapman thanked Tamworth Regional Council, which has agreed to handle the installation of the statue for the Committee. It is anticipated that the statue will be placed on site well before the Festival although it will not be unveiled until Australia Day.

Because of Smoky’s popularity and his long-standing association with Tamworth, it is expected the unveiling will attract a large crowd on the day.