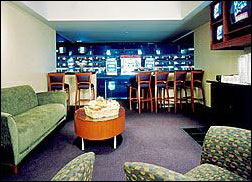 SEATTLE, WA (CelebrityAccess MediaWire) — In a major reversal of the trend of rising sports finances, and the way corporate American entertains its clients, sports teams around the country are tearing luxury suites out of their stadiums and arenas, making more room for lower-priced entertainment, and less for the luxury lifestyle.

According to the Wall Street Journal, the Seattle Mariners eliminated eight skyboxes from Safeco Field in December, removing the beech-hardwood floors, oriental rugs and leather furniture, instead installing rows of regular seats. The Milwaukee Brewers removed five of their 69 suites during this off-season, making way for a lower-priced, 9,000-square-foot party area. The Chicago White Sox recently gutted 10 suites to build a new press box.

The move away from luxury suites at stadiums stems from many social changes the stadium designers couldn’t have predicted five or 10 years ago, from changes in tax laws to scandal-driven reforms on corporate entertaining.

Bank of America cut back its use of a handful of suites in part because it wasn’t getting enough clients to fill the seats. The company also made its rules for use much stricter, forcing employees to fill out forms detailing the names and affiliations of clients brought to the luxury boxes and why those guests deserve the seat. The tickets are assigned a client identification number and are sent only after the company grants approval.

Cleveland-based electric-products company Pepco decided not to renew three of its four suites, instead opting to take clients on fishing trips in a more cost-effective and social way to get face time.

“You're not really getting your money's worth and you get the same thing done,” Pepco CEO Jack Borkey Sr. told the WSJ. “Plus, the team stinks.”

Many stadiums have chosen to replace their suites with VIP rooms and underground clubs, that come with courtside or field level suites, allowing ticket holders to move freely from the game to the party.

Other teams are trying extra perks and better lounges to lure companies back to the suites, including lower prices on leases, and cheaper suite packages for fewer games. –by CelebrityAccess Staff Writers