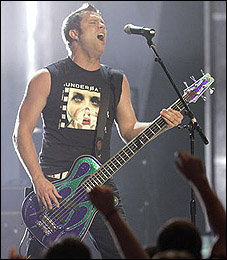 The Christian rock group Switchfoot won artist of the year at Wednesday's Gospel Music Association awards show, one of four honors bestowed on the band during the night.

Besides artist of the year, Switchfoot won best rock or contemporary recorded song for "Dare You to Move," as well as the short and long form music video awards.

The band did not attend the show.

"Our goal is to reach all ages," Jason Crabb said. "We want to reach from the oldest to the youngest because they all need the message of Jesus Christ.

"This is such an encouragement," Hall said. "There are so many people in the world who need hope and it's so cool to be a tiny part of that."

Hall said the idea for "Who Am I" came to him as he was driving home late one night with his wife and children asleep in the car.

"In the midst of my own little worship time, I stopped and wondered, 'Who am I to think I can just call up to God whenever I want, from the middle of nowhere, and expect Him to hear me.' … That's where it started," Hall said.

It was the second consecutive year that the 35-year-old youth minister won the top songwriting honor at the Dove Awards.

Mullen said she liked the message in the lyrics.

"I decided to do it as a reminder and as a challenge because we are all called to live together as everyday people," she said.

"I don't even know what's been going on the past couple years of my life _ it's been a whirlwind," he said. "God has blown me away with numerous blessings."

The band Building 429 won in the new artist category, and "The Passion of the Christ: Songs" won for special event album.

Another album from the movie, "The Passion of the Christ Original Motion Picture Soundtrack," won for instrumental album.

"Thanks again to Mel Gibson for making this amazing film which God has used in amazing ways," said Steven Curtis Chapman, one of 21 artists on "The Passion of the Christ: Songs" album.

The night's leading nominee, Michael W. Smith, was shut out despite eight nominations.

Songwriter of the Year Mark Hall

Group of the Year Casting Crowns

Artist of the Year Switchfoot

New Artist of the Year Building 429

Producer of the Year Ed Cash