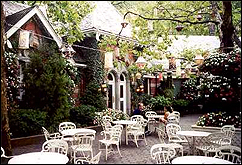 NEW YORK (CelebrityAccess MediaWire) — New York City's Tavern on the Green is re-entering the live entertainment arena with a limited engagement restoration of its Chestnut Room, staging "Live, From The Chestnut Room" from February 15 through March 16.

On select Thursday evenings and every Friday night during that five-week period, "Live, From The Chestnut Room" will showcase musical and cabaret talent.

In charge of the musical line-up is master music maven Lenny Triola, whose Chestnut Room bookings of jazz legends Illinois Jacquet and Little Jimmy Scott in the 1990s significantly helped renew their careers. Singer Maureen Hamill will not only kick-off the Chestnut Room's winter revival on February 15 and 16, but will close iton March 15 and 16.

Shows start at 7:30 pm, and there will be a $20 per person music charge and a $15 food and beverage minimum. — Jane Cohen and Bob Grossweiner