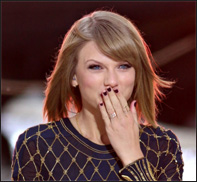 NEW YORK (Hypebot) – For an artist with such a carefully orchestrated public image and strong connection with her fans, Taylor Swift has been remarkably silent during the uproar after she pulled her catalog off Spotify during the same week that her new album had the best selling debut of any release since 2002.

That changed yesterday during an interview with Yahoo during which Swift shared the reason behind the takedown.

"Spotify feels to me a bit like a grand experiment.”

“If I had streamed the new album, it's impossible to speculate what would have happened. But all I can say is music is changing so quickly, and the landscape of the music industry itself is changing so quickly, that everything new, like Spotify, all feels to me a bit like a grand experiment,” Swift told Yahoo Music. “And I’m not willing to contribute my life’s work to an experiment that I don’t feel fairly compensates the writers, producers, artists, and creators of this music. And I just don’t agree with perpetuating the perception that music has no value and should be free.”

On her previous experiments with streaming, Swift said, “It didn’t feel right to me. I felt like I was saying to my fans, ‘If you create music someday, if you create a painting someday, someone can just walk into a museum, take it off the wall, rip off a corner off it, and it’s theirs now and they don’t have to pay for it.’ I didn’t like the perception that it was putting forth. And so I decided to change the way I was doing things.”