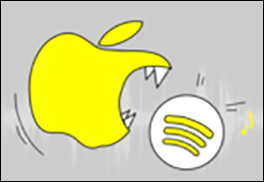 (Hypebot) – With Apple Music and Tidal nipping at Spotify's heels, the streaming world has become a competitive one, and as artists start to release content exclusives on only one service, listeners may start to find their online listening experience fragmented.

The streaming landscape has changed quite a bit since the beginning of the year. We’ve seen the launch of Tidal, Apple’s new service is humming along nicely and now Digital Music News reports that Spotify may be considering a paywall on some of its catalogue, at least – something they’d hitherto vowed would never come.

Then again, their licenses are up for renewal and two of the three extant major labels don’t seem happy with “everything’s free”.

It is just possible that Jay Z-fronted Tidal and Apple Music are seen as the first credible competitors to Spotify, which changes dynamics considerably. In previous years, Spotify could (somewhat) justifiably say “it’s us or the pirates”. These days, “where else you gonna go?” is not a question they want to be asking, lest they get a reply.

Whichever way you look at it, the streaming sphere has suddenly become competitive. Incumbent Spotify and the two upstarts now face stiff competition to increase their user-bases (and keep the users they already have) – and that is likely to result in a bidding war for exclusives on new releases. We are arguably seeing one of the first volleys being fired in the form of Prince’s latest: HITNRUN.

Score one for Jay Z.

For some, Prince isn’t the top-dollar item he used to be, although he is undoubtedly one of the all-time greats still releasing new music. The big question is: what’s everyone else going to do? In many ways, the old stuff is even more important than the new in this case. Prince has already pulled his catalogue from everywhere else, so we can assume that he sees his future with Jay Z’s service – for the time being, at least.

(Aside: Prince’s curveball move of making a single available on Spotify at the end of July, may have been a way of letting his fans amongst Spotify users know: “here’s what I’m doing these days; come over to Tidal if you want more.”)

In short, the matter of which service has the classic songs, the big stars and the hot new releases suddenly isn’t as clear cut as when you could reasonably expect around 90% of what you wanted to hear to be on Spotify.

I can’t say that the situation isn’t to my liking. Spotify needed to get taken down a peg and it looks like that’s happening right now. There is one disturbing possibility we really should consider, however.

In technological terms: streaming services are incompatible with one another.

The classic problem with streaming services is this: they have everything, so once a user has a personal favorite, they have no reason to switch (other than: a lower-priced competitor). We already know what this means for artist revenues.

The non-classic problem we might soon have is this: with three streaming services to choose from, each having exclusive deals on several of your favorite artists, which one do you pick?

If you’re a die-hard Prince fan, you know where you gotta be. But what if Apple or Spotify (as part of its putative Premium-Only service) have exclusives on your other favorite artists? Will you maintain three separate subscriptions or will you simply stop following one (or more) of those artists?

Old-school purchases did not have this problem. You bought a record (or CD, or download, or whatever) and it played on your player. It did not matter much who you got it from. A retail exclusive might mean you’d have to go to a store that you didn’t normally buy from, but that was it. Beyond the single purchase, you were not tied to them in any way.

The streaming service business model is a walled garden by necessity – both ad-supported and subscription services rely on attracting (and keeping) the widest possible user base. Mixing and matching between streaming services – depending on who’s got which artists – isn’t really an option.

Are you thinking what I’m thinking? Cue the cries of a fragmented online music experience and questions of why the music industry can’t get its shit together and give us everything in one place.

One more thing streaming-as-we-know-it fails at is providing a unified music listening experience.

I should emphasise here, that the problem is actually rather simple to solve from a technological perspective: a single player app (hell, any number of player apps with similar capabilities but different user experiences) could conceivably pull a users music from any number of disparate services – much like a web browser allows you to view any website out there. The real problem lies elsewhere: sorting out the business issues.

Right now, each streaming service is trying to be the valve through which all music flows – so they can take a cut on every play. As long as the idea of “pay once, hear all music” persists, there really isn’t room for more than one streaming service (without fragmenting the audience – which benefits exactly nobody).

I’d advise the powers that be to think carefully on this, because it sure looks like a conversation we will soon be having (again). Being my usual, cynical self, I expect that this will come as a huge surprise to everyone involved. Again.