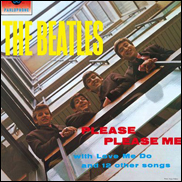 So he starts telling Beatle stories.

Yup, he knew McCartney back in ‘62, in London. He and Lennon couldn’t write for shit. Credit George Martin for teaching them how. Hell, Irving Green could have had the first album, but he didn’t want it! Who was interested in a band that couldn’t write its own material!

Well, that Vee-Jay album didn’t sell until after "Meet The Beatles", when "I Want To Hold Your Hand" was embellished in the national consciousness. That’s why the band made it. They wrote great songs.

My jaw was dropping.

But we started with Frank. The Chairman of the Board. How if they had a meeting, Frank not only showed up on time, he showed up EARLY! Quincy learned to rehearse the band before. Because Frank would do one take and leave, saying he nailed it. Q would complain the band hadn’t yet gelled, but Sinatra didn’t give a shit, he was out the door. Like the time Frank nailed it in TV rehearsal and refused to come back for the show. They had to use the rehearsal tape on air!

Every time I see Quincy Jones he tells me he’s gonna have me and Shawn Fanning up to his house.

Today was the day.

I haven’t driven that high up in Bel Air in ages. Since back in the seventies, when I moved to L.A. and explored the entire city.

After breaking through the gate, I was confronted with a compound. And when security let me inside, I walked into a screening room with a window that not only revealed the entire westside, but miles of the Pacific Ocean. This is what you made the money for. To wake up to a view like this would be a dream. One a middle class boy from Fairfield, Connecticut could not even fathom. Hell, I went to college with the guy whose father founded Jolly Green Giant, even the scion of Murray the K, but it’s a long way from Middlebury, Vermont to Quincy Jones’ inner sanctum.

Just like it’s a long way from Chicago to Seattle to L.A. for Q.

He stayed in Paris for five years. They respected jazz musicians there. He almost renounced his citizenship.

But then he went on to work for Mercury Records, recording "It’s My Party" with Lesley Gore. Running into Phil Spector at an event, hearing how the boy genius was going to put out a "Party" track Q left the shindig, went back to the office, pressed up demos and shipped ‘em. And the track was a hit so fast he didn’t have time to convince Lesley to change her last name, which he so desired.

The original idea was to get Stevie Wonder to write "We Are The World". But Stevie isn’t as punctual as Frank Sinatra. MJ had the song ready.

As for breaking the color barrier on MTV? Walter Yetnikoff takes credit, but Q says that story’s wrong. They were all in Acapulco, at the Warner house. This was before Warner divested its interest in the music television channel. Steve Ross put it to Bob Pittman. Why wasn’t there black music on MTV?

Then the phone call came. They were going with "Billie Jean".

And the rest is history.

Michael didn’t want the intro to "Thriller", he kept saying he couldn’t dance to it!

They kept the five original songs and got rid of the four worst and replaced them with four more of the eight hundred submitted. That’s how "Human Nature" made the record.

As for Michael? Once he got on the cover of "People" without doing an interview, after they dedicated a complete issue to him right thereafter, he was a changed man. Fame spooks you. You want it, but can you handle it?

But fame doesn’t come to everybody.

Q asked us who did "Whole Lotta Shakin’ Goin On".

After I said Jerry Lee Lewis, he told me he cut the song with Big Maybelle two years before!

And after talking about the racial divide, the two radio formats, one for white and one for black, about ultimately cutting the same song with both the black and white acts, Q returned to his main mantra. How no one knows. The history, where everything came from.

They don’t know about Louis Armstrong and John Coltrane.

But they also don’t know that certain rap terms come from bebop. "Homey"? Been around for decades!

That’s one of Q’s goals. To educate our populace on the widest played music in the world, American music. He’s got a million projects. But he also wants to tie this educational mission in with his new album.

That’s why we were there. To brainstorm marketing ideas for this compilation of Q songs done by today’s stars. Everybody from Justin Timberlake, who championed the idea, to Robin Thicke to Amy Winehouse to Eminem. How do we get the word out? How do we reinvent the business so people pay for music? How do we educate people along the way?

I made them watch the video from Tom Petty’s Superhighway Tour. Done so well, imagine being able to purchase Q’s new album before it’s released and getting all these bonus features. Videos not only about the making of the album, but the musical history Q loves so.

Shawn Fanning blew my mind. The record business pariah talked about the power of gaming. That’s how you get into the mind of the younger generation. Allow them to earn badges, let them feel good about achieving something!

One thing Shawn said was truly brilliant. He wants to quantify our discovery, our dedication. Imagine being able to prove that you were into the band early, before your friends, before everybody else. The Web allows this. That statistic can be registered!

A lot of great ideas were brought up. And Q’s got the power to not only get things done, but get people’s attention.

But what blew my mind was the stories. In many cases, the truth as opposed to the legend. But also filling in gaps that in some cases I didn’t even know existed.

Q seems to know everybody. From heads of state to musicians way out of his genre. Hell, he puts 500,000 air miles under his belt every year. He gets around, he’s got his finger on the pulse. He wants to make a difference. And along the way, he charms you, he makes friends, you bond to him.

I mean I’m sitting there with an interior dialogue in my brain, asking myself, why is he telling me all this? Little Bobby Lefsetz. Can I really be that important?

Well, Q made me feel that way.

It was one of those crowning moments. Not only in Hollywood, but music. I’ve dedicated my life to listening. And it’s like Geraldo Rivera opened a vault, one that I didn’t believe I had access to, one that I wasn’t really convinced existed, and all this information came tumbling out. Not via hearsay, but from a guy who was truly there. Snorting speed with Ray Charles. Making music with Donna Summer on her way from the clubs to Jesus. Not a bystander, but a player.

A guy who Paul McCartney invites for dinner who brings his own Tabasco sauce, to add some spice to the Beatle’s vegetarian concoctions. Yes, Paul told Q he had something special for him. Beef? From the surrounding cows? No, Paul revealed a huge hunk of tofu! Huh?

You shoulda been there. It’s like "Rolling Stone" came alive. Like you were backstage at the concert hall, the radio station and MTV all at once.

It doesn’t get any better than this.