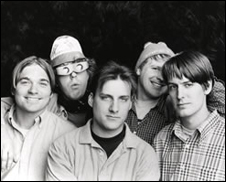 LONDON (VIP NEWS) — With All Tomorrow’s Parties and three headline shows at London’s Brixton Academy already sold out and their appearance at Primavera already publicized, Pavement now announce a full slate of European headline dates in May. No additional European headline dates are currently planned for this reunion tour. Some shows go on sale today and the remainder will go on sale over the next several days.


As previously revealed after years of speculation, this most important American band of the 1990s is returning to the stage with the lineup of Mark Ibold, Scott “Spiral Stairs” Kannberg, Stephen Malkmus, Bob Nastanovich and Steve West reuniting for dates around the world in 2010. This tour is not a prelude to further touring or a permanent reunion. Pavement’s catalog for the Matador, Domino, Drag City and Treble Kicker imprints has come to define in the eyes of many the blueprint for independent rock over the past generation.