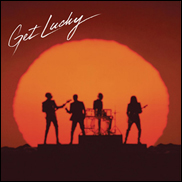 What kind of crazy world do we live in where a single track trumps an entire rock festival? One in which Daft Punk releases its new single on the second weekend of Coachella.

Not that the two are not intertwined.

The buzz has been building, it's at a fever pitch. And if upon first listen you believe "Get Lucky" lives up to the hype, you're lying. But something curious happens as you continue to listen, you get hooked.

At first you don't know whether it's an outtake from "Saturday Night Fever," a highly-skilled SNL skit or… The verse vocal sounds like something from Peter Lemongello, and then you hear the swelling vocals in the chorus and you say THAT'S TODAY'S DANCE MUSIC!

And to think we all claimed disco sucked back in '79! Wiped it from the face of the earth to make us feel self-satisfied, denying the magic of Prince's "Dirty Mind," which was basically distilled disco. In other words, that which you hate today you're gonna love tomorrow.

And you're gonna love "Get Lucky."

And the person who's gonna hook you is Nile Rodgers.

Huh? The has-been disco star who went on to produce rock records and then disappear, who was last seen on a creepy cancer victory lap, selling a book, the last stop of those who've exhausted all other options?

Maybe because dance music is faceless. You can be old, young, fat or thin, it doesn't matter. Hell, doesn't the music set you free anyway? Throw off your inhibitions?

"Get Lucky" is the song of the summer, and it's still SPRING!

Repeatability. Something you want to hear again. That's a hit. Whether radio plays it or not, whether the press writes about it or not, "Get Lucky" is gonna be unavoidable in the clubs, at the beach, because not only is it infectious, it makes you feel GOOD!

I know, I know, you hate dance music and everything it stands for. But the problem with Brooklyn music is it's too cerebral, you've got to think about it to like it.

And Top Forty music is too calculated, the artist is just a two-dimensional face atop the calculated work of old people who need the money to feed their lifestyle, to make their car payments and private school tuition.

And I'd like to tell you "Get Lucky" is revolutionary, but it's just a distillation of what came before, but without the kitchen sink, it's pretty simple.

And the magic comes in at 2:20. When you hear Nile's influence.

And speaking of has-beens, has there been a delay in the transatlantic cable? Pharrell?

Then again, the last time Daft Punk put out a new record we all didn't have smartphones.

2. Don't equate mainstream press with ubiquity, never mind success. Most acts are on the front page for a day, and then they're gone, like my favorite whipping boy, David Bowie. Read ANYTHING about his new record in weeks? Bowie made a mistake, the marketing campaign was better than the music, and at the end of the day it's what goes into your ears, not your eyes. Daft Punk never peaked, but they've been on the lips of not only hipsters for years.

3. Less is more. Sure, there was the SNL teaser, the Coachella video, but these strategic strikes eclipsed Justin Timberlake's scorched earth publicity campaign. We don't want to be beat upon the head, we want to meet you halfway.

4. The publicity campaign did not work without the history. Contrary to the Davis/Mottola paradigm, you don't front-load any longer. If you want to last, if you want to get rich, you grow slowly, you percolate, which seems antithetical in this here today and gone tomorrow era, but that's just the point! You don't want to be flavor of the moment, if you peak, you want it to be deep into your career.

5. The game is about listenability and repeatability. It's not whether someone says your track is good or bad, but whether they say PLAY THAT AGAIN! That's the reaction you want.

6. None of the above is an adequate explanation. There's just a way "Get Lucky" affects you, that's its magic. It's a drug with no aftertaste, no hangover. Other than euphoria!