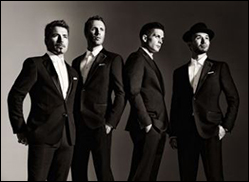 SAN DIEGO (CelebrityAccess) — Canadian quartet The Tenors were quick to apologize after group member Remigio Pereira held up a sign and added the lyrics "All Lives Matter" while singing the Canadian national anthem at the MLB All-Star pre-game performance in San Diego.

Remigio's comment referenced a controversial reaction to the #blacklivesmatter movement, protesting apparent racial disparties in law enforcement. Last week, 5 police officers were killed and nine injured in attacks during a rally in Dallas, and other attacks have occured in cities around the U.S. as well.

After the incident, the group released a statement, distancing themselves from Remigio's actions and it appears as if he has been suspended from the group.

"The Tenors are deeply sorry for the disrespectful and misguided lack of judgment by one member of the group acting as a 'lone wolf' today during the singing of the Canadian national anthem at the Major League Baseball All-Star Game in San Diego. The other members of the group are shocked and embarrassed by the actions of Remigio Pereira, who changed the lyrics of our treasured anthem and used this coveted platform to serve his own political views. Our sincere apologies and regrets go out to everybody who witnessed this shameful act, to our fellow Canadians, to Major League Baseball, to our friends, families, fans and to all those affected. The actions of one member of this group were extremely selfish and he will not be performing with The Tenors until further notice," the statement said. – Staff Writers