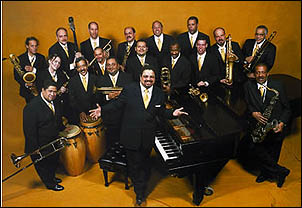 (CelebrityAccess News Service) – Jazz at Lincoln Center (JALC) has placed the
Afro-Latin Jazz Orchestra (ALJO), led by composer/arranger/pianist Arturo
O'Farrill, with the Ted Kurland Associates (TKA). The ALJO
debuted during Jazz At Lincoln Center's 2002-2003 season and is comprised of
18 of Latin jazz virtuosos on the current scene. TKA will
exclusively book the ensemble on a world-wide basis.

Wynton Marsalis, artistic director of Jazz at Lincoln Center, who
approached O'Farrill about creating the ALJO, sees the addition of the
orchestra as helping to continue the innovations of the greats of the Latin
jazz genre. "The ALJO," he stated, "has filled a great void on the New York
cultural scene by playing the classics of the Afro-Latin jazz tradition,
commissioning new works and playing dances. This band is firmly connected
to the essence of Latin jazz. They have great soloists and first-class
ensemble playing."

O'Farrill, who has played and recorded extensively with many of the
most prominent names in Latin jazz, connects the goals of the ALJO with
those of his predecessors, states "The ALJO will perform the very best of
the canon of the Afro-Latin genre. This genre will die if we do not support
a new generation of composers, arrangers, and instrumentalists, and there is
no other orchestra in the world that has this kind of mandate."

The ALJO
has already showcased classic charts by such Latin jazz legends as Machito, Ray Santos and Mario Bauza, as well as a few pieces by Chico O'Farrill and future programs will include more gems from the Latin jazz tradition. The ALJO performances for the 2004-2005 season are highly anticipated concert
events for JALC audiences.

With such a success on their hands, JALC wants to expand the scope of the
Afro-Latin Jazz Orchestra's influence beyond New York City and enable as
broad an audience as possible to appreciate the ensemble's world-class
performances of Latin jazz.
TKA has already began booking engagements for the 2004-2005 season. –Jane Chen and Bob Grossweiner