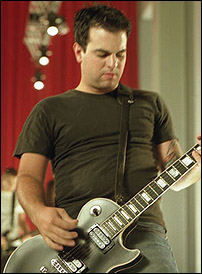 Unwritten Law has canceled two concerts (August 31 at the Bumbershoot Festival in Seattle and September 1 in Portland, OR) after guitarist Steve Morris was injured at his home the night of August 30, when he was personally attacked because of noise levels. A homemade bomb made of dry ice allegedly planted by his neighbor exploded. Morris sustained a concussion and injury to his eardrums. A security guard and a local police officer were also injured. The neighbor was arrested and taken into custody.

According to the band's Web site, the bomb was thrown at Steve's front door and onto his balcony as a result of an ongoing domestic dispute with his 23-year old neighbor over noise levels ("which is hard to believe because Steve has hardly
been home over the last 3 months," the post notes).

"The bomb thrown onto his balcony failed to detonate,
so Steve, thinking it was just ice in a bottle, put it into the freezer as evidence to show the landlord," the post explains. "Then a second bomb detonated outside his front door, damaging the front door and a light fixture. Upon hearing this explosion, Steve called security and the police. When they arrived, they asked to see the original device, and 30 seconds after being removed from the freezer, it detonated in the hands of the security guard, severely injuring the security guard. Steve and the police officer were also injured due to the blast, and Steve is suffering from a concussion and fluid in his eardrums. Medical advice received for this has dictated that Steve must take a break from touring until he has recovered to ensure that he is and will be ok. We anticipate picking the tour back up on September 3rd in Chico."