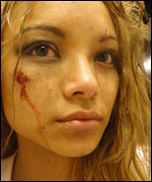 CARTERVILLE, IL (CelebrityAccess MediaWire) — Tila Tequila is gathering witnesses and putting together a case against concert promoters after "monsters" injured her at the Gathering of the Juggalos in Illinois on Saturday.

The reality TV actress complained that audience members pelted her with stones and feces during the outdoor music festival.

According to an eyewitness account on The Village Voice, the scene was quite violent.

"There were several rubber dildos hurled at her–pretty sure the sex toys missed her, but it was hard to keep track at the time– along with beer cans, Faygo containers, Stryofoam cups, liquor bottles, cigarettes, mustard, half a lemon, a pizza slice, a pearl bracelet, a pudding cup, an unopened can of ICP's self-branded energy drink Spazmatic, part of a watermelon allegedly soaked in feces and urine, a clothed baby doll, a mini Mag Lite, a bag of chicken tenderloin… Security pulled her offstage and hustled her to a nearby trailer, where she says windows got smashed. I was standing there and I can admit that the scene had gotten pretty ugly."