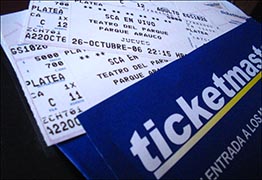 RICHMOND, VA (Hypebot) – In most parts of the country, state officials are working to limit ticket re-sales and scalping. Not so in Virginia, where a new bill has passed that guarantees the ability to resell concert and other event tickets.

A new bill passed in the Virginia state legislature guarantees the right of a ticket purchaser to resell them on the internet ticketing platform of their choice. Virginia Governor Terry McAuliffe has said that he supports the bill.

HB 1825 Ticket Resale Rights Act was introduced by Virginia Delegate Dave Albo, who tried to resell tickets he'd purchased to an Iron Maiden concert after his plans changed. Ticket seller Ticketmaster would not allow Albo to resell his ticket on its re-sale platform, apparently since the show had not sold out. When Albo then decided to give them away, he was thwarted by a Ticketmaster rule requiring that ticket holders show a matching ID or credit card at the show.

"Such a violation of free markets and freedom," said Del. Jason Miyares, R-Virginia Beach, who told his fellow legislators that his daughter missed a U2 concert because of these same rules.

"Rights to resell tickets; civil penalty. Prohibits any person that issues tickets for admission to a professional concert, professional sporting event, or professional theatrical production, open to the public for which tickets are ordinarily sold, from issuing the ticket solely through a delivery method that substantially prevents the ticket purchaser from lawfully reselling the ticket on the Internet ticketing platform of the ticket purchaser's choice. The measure also prohibits a person from being discriminated against or denied admission to an event solely on the basis that the person resold a ticket, or purchased a resold ticket, on a specific Internet ticketing platform. A person violating these prohibitions is subject to a civil penalty of not less than $1,000 nor more than $5,000."

Virginia's new law runs contrary to efforts by state legislatures in Tennessee and elsewhere who are working to place additional limits on secondary ticketing, and a growing number of artists like Eric Church who recently canceled 25,000 tickets purchased by scalpers for his current tour.

Ticketmaster has not yet commented on Virginia's new law.