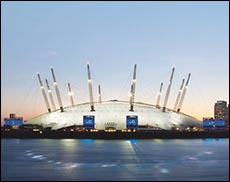 LONDON (CelebrityAccess) — AEG announced that they have renewed their partnership to management one of the UK's most successful and recognizable venues, The O2.

The ten-year agreement will see both AEG and The O2 make joint investments in the venue complex, including improvements to customer-facing areas, venue access and customer experience at the venue.

Planned upgrades include providing high-density O2 Wifi throughout the entire venue, facilities to host more customers and their guests pre-show, as well as the recently announced 205,000sq ft. designer outlet village, currently under construction and due to open in late 2018.

New technology installed in the arena will track and analyze the customer interactions with the venue, tracking everything from calories burned, noise generated by the audience, as well as the most popular moment of the night based on the crowd's response.

As well, from 2018, double the number of tickets for O2 customers will be available via Priority Tickets, ensuring they get access 48 hours before general release.

O2 and AEG's partnership dates back to 2005 when the deal was struck to convert the former Millenium Dome into the venue complex known as the O2. Since opening its doors in 2007, the O2 has hosted more than 60 million people have visited the facility and more than 20 million event tickets have been sold. –

Paul Samuels, Executive Vice President of AEG Europe said: "Together AEG and O2 have created the world's most popular music and entertainment venue, now celebrating its 10th year of operation. From signing the deal back in 2005, O2 have become a significant and transformative force in the music business and our partnership has enabled countless benefits and experiences for their customers and all music, sports, and entertainment fans." – Staff Writers