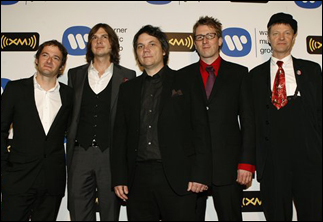 Nonesuch Records will release the band’s new concert DVD, ‘Ashes of American Flags’, on
Saturday, April 18 at independent retailers nationwide as part of national Record Store Day. The
DVD will also be available on that day from wilcoworld.net and nonesuch.com. A broader
release through iTunes, Amazon and chain retail outlets will follow on April 28. A trailer can be
viewed by visiting wilcoworld.net or ashesofamericanmovie.com.
To celebrate the DVD release and to lend support to independent record stores, the band will
make an in-store appearance at Disc Exchange in Knoxville, TN on Saturday, April 18 at 2 pm.
Also as an exclusive bonus to anyone purchasing Ashes of American Flags before April 28, one
complete concert drawn from a show featured in the film will be available for audio download.
This exclusive concert download will only be available via an embedded link on the DVD from
April 18 to April 27. This is in addition to the 20 full songs featured in the DVD and
downloadable to everyone who purchases it.

Ashes of American Flags is produced and directed by Christoph Green and Fugazi’s Brendan
Canty and shot in five quintessentially American venues- Cain’s Ballroom in Tulsa, OK,
Tipitina’s in New Orleans, LA, The Mobile Civic Center in Mobile, AL, The Ryman Auditorium
in Nashville, TN and the 9:30 Club in Washington D.C. Mixing live concert footage with band
interviews, it takes the viewer behind the scenes of Wilco’s 2008 U.S. tour capturing both the
expansive experience of rolling across America in a tour bus and the intimacy that happens night
after night between the members of Wilco and the music they make, and between the band and
their fans who come to experience it with them.

Shot in High Definition, Ashes of American Flags is a Trixie production in association with Nonesuch
Records and dBpm, Inc.
Wilco have just completed work on their seventh studio album. The as-yet-untitled disc is
scheduled for a late June release. Produced by Wilco and Jim Scott, it is the follow up to 2007’s
Sky Blue Sky.