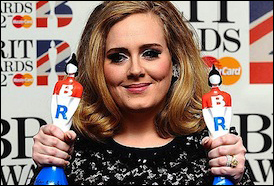 LONDON (VIP-NEWS) — Adele has won two prizes at the Brit Awards ceremony in London, but was at the centre of controversy after one of her acceptance speeches was cut short.

Her speech was halted after she picked up the prize for best British album. She also won best British female.

"I flung the middle finger. That was for the suits at the Brit Awards, not my fans. I'm sorry if I offended anyone but the suits offended me," she said.

Adele added her Brits to the six Grammy Awards she won last weekend, capping a year of huge global success. According to her record label, the London singer's second album 21 has sold 17 million copies around the world and hit number one in 24 countries.

Accepting the best album prize – the final and most prestigious of the night – she said: "Nothing makes me prouder than coming home with six Grammys and then coming to the Brits and winning album of the year.

"I'm so proud to be British and to be flying our flag."

But there were boos from the audience as she was interrupted by host James Corden in order to introduce the final perfomers, Blur. Adele then added: "Can I just say, then, goodbye and I'll see you next time round."
Ed Sheeran Ed Sheeran was rewarded for the success of his debut album +

Her gesture was then momentarily visible on the live ITV1 coverage.

"I was about to thank the British public for all their support but they cut me off," the star later said backstage. "So thank you very much for all your support. It's amazing."

ITV later issued a statement about the incident, saying: "The Brits is a live event. Unfortunately the programme was over-running and we had to move on. We would like to apologise to Adele for the interruption."

A Brits spokesman added: "We regret this happened and we send our deepest apologies to Adele that her big moment was cut short.

"We don't want this to undermine her incredible achievement in winning our night's biggest award. It tops off what's been an incredible year for her."
'Humbling'

In the best British female category, Adele beat Jessie J, Florence & The Machine, Kate Bush and last year's winner Laura Marling. She also sang Rolling at the Deep at the ceremony – only her second performance since throat surgery last year.

Sheeran led the nominations going into the ceremony, up for best British male, breakthrough, single and album.

The 21-year-old told the crowd: "I honestly didn't think I'd get this one."

Coldplay were crowned best British group in a category voted for by listeners to BBC Radio 2. Frontman Chris Martin described it as "very humbling".

Speaking backstage about winning best group more times than any other band, Martin said: "They keep splitting up. They keep taking themselves out of the game. We're the only players still on the pitch. No Pulp, no Oasis. Take That are on holiday. We'll take it if they're not around."

The outstanding contribution honour went to reformed Britpop favourites Blur, who performed a medley of their hits. Their last appearance at the Brit Awards was in 1995, when they went home with four trophies.

Singer Damon Albarn said: "Last time we were here was 17 years ago and what happened that night seemed to have a really profound effect on our lives, so it's very nice to come back and say thank you very much for this honour."

One Direction won best single for their hit What Makes You Beautiful, beating tracks including Adele's Someone Like You, Ed Sheeran's The A Team and Price Tag by Jessie J and BoB.

The international breakthrough trophy went to fast-rising New York-based pop star Lana Del Rey. She told the crowd: "This award means much more to me than you know and I just want to say that without the support of everyone in this room and everyone in the UK I'd really be lost."

The event also included tributes to the late stars Whitney Houston and Amy Winehouse and featured performances from Noel Gallagher, Florence and the Machine, Rihanna and Olly Murs with Rizzle Kicks.