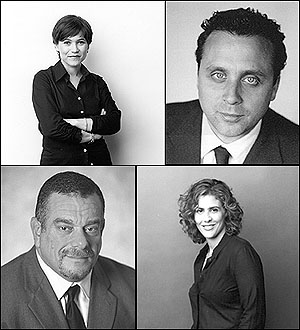 "We welcome these four excellent additions to our Board," said Brokaw. "This change is further evolution of the leadership at William Morris as it heads toward a spectacular future. These new members have made outstanding contributions to the William Morris Agency, and now they will play a major role in the overall direction of the company."

"Each of these distinguished young agents brings a fresh perspective and energy to our Board," said Wiatt. "This announcement signifies more than the promotion of four outstanding agents, it is also a history-making event for the agency as Suzanne and Jennifer become the first women to be appointed to the Board. We will benefit and grow from all of their counsel."

Mark Itkin, 49, graduated Summa cum Laude & Phi Beta Kappa from UCLA with a BA degree in Communication Studies and followed it with a JD from Boalt Hall at U.C. Berkeley. After practicing law in the music business for three years, Itkin joined WMA in 1982 to become a television-packaging agent, specializing in first-run syndication, pay and basic cable television. In 1987, he became vice president and West Coast head of the first-run syndication and cable packaging department; and in 1991, he was promoted to senior vice president. Itkin has packaged such television network, cable and syndication projects as "Big Brother," "Fear Factor," "Buffy the Vampire Slayer," "WWE Smackdown," the new "Tarzan and Jane," "The Ricki Lake Show," "American Gladiators," "People's Court," "V.I.P.," "The Man Show" and "Loveline."

John Fogelman, 37, did his undergraduate studies at the University of Southern California and Tulane University. In 1987, he joined KPMG Peat Marwick where he was accredited with a CPA. In 1990, he left accounting and enrolled at the Anderson School of Business at UCLA where he earned his MBA. Fogelman joined WMA in 1992 through the acquisition of Triad Agency and was promoted to talent agent in the Motion Picture Department. In 2000, he was named head of the Motion Picture Talent Department and in 2002, co-head of Motion Pictures Worldwide. Fogelman's clients include Courteney Cox Arquette, Eric Bana, Kieran Culkin, Claire Forlani, Tyrese Gibson, Whoopi Goldberg, Topher Grace, Tom Green, Dylan McDermott, Neal McDonough, Suzan-Lori Parks, Mekhi Phifer, Roland Suso Richter, Mark Ruffalo, Rodrigo Santoro, Chloe Sevigny, Martin Short, Stephen Sommers and Kevin Spacey.

Suzanne Gluck, 43, graduated from Brown University. She joined WMA in 2001 as co-head of the Literary Department after a 16-year career at ICM, where she was hired as a literary agent when she was just 24 years old. Gluck represents a wide range of best-selling and prize-winning authors, including Caleb Carr ("The Alienist"), John Berendt ("Midnight in the Garden of Good and Evil"), Nicola Kraus and Emma McLaughlin ("The Nanny Diaries"), Matthew Pearl ("The Dante Club"), Jeanette Winterson ("The Passion"), Kurt Andersen ("Turn of the Century") and Adriana Trigiani (the "Big Stone Gap" trilogy).

Jennifer Rudolph Walsh, 36, came to WMA in 2001 when the Agency acquired The Writers Shop, in which she was a co-owner and co-president. She began her career as an intern in what was formerly the Virginia Barber Literary Agency (and became The Writer's Shop) during her junior year at Kenyon College. Walsh went on to work for Barber after graduation, becoming a full agent in 1990. Walsh's prestigious and best-selling client list includes authors James Patterson ("The Beach House"), Kathy Reichs ("Deja Dead"), Christina Schwarz ("Drowning Ruth"), Ethan Hawke ("The Hottest State"), Ann Brashares ("Sisterhood of the Traveling Pants"), Antwone Fisher ("Finding Fish") and Suzan-Lori Parks ("Getting Mother's Body"), among others.

Marc Geiger has left ARTISTdirect, the company he helped form in 1996 and then took public four year later, and has gone back to the William Morris Agency in Los Angeles, effective June 9. Geiger will become senior vice president and agent in the contemporary music department. He is bringing no acts with him but is expected to sign new ones. Geiger will remain a member of the board of directors for the next three years at ARTISTdirect, where he was chairman.

Geiger started his agency career in 1984 at Regency Artists, which later became Triad Artists. At Triad, he repped such bands as Jane's Addiction, Pixies, New Order and The Smiths, among others.

Triad was acquire by the William Morris Agency in 1992. During his stint at WMA, Geiger was instrumental in the development of Lollapalooza with fellow agent Don Muller and Jane's Addiction frontman Perry Farrell. WMA today owns the rights to the festival which is relaunching this summer after a five year hiatus.

The Agency Group is opening a Nashville office on June 9, making it the global
company's seventh office. Other offices are located in Amsterdam, Copenhagen, London,
Los Angeles, New York and Toronto. Paul Lohr, an 18-year plus veteran of the Buddy Lee
Agency, will front the new office, bringing Riders In The Sky with him.

"We have been looking very carefully over the last several years of opening an office in Nashville, and with the availability of Paul Lohr, we have found the right partner to head our new office in Nashville," said Neil Warnock, Chairman of The Agency Group.

They have signed three acts to Buzz Management: Shannon Lawson (MCA Records), rock band Stroller and country band Mammoth Jack. Bryan Wayne is signed to the publishing arm of Front Porch Entertainment Group. Wayne has had success with “What If He’s An Angel” (recorded by Tommy Shane Steiner” and “Country By The Grace of God” (recorded by Chris Cagle).

“Front Porch Entertainment Group is a company dedicated to assisting artists in multiple areas of the music business including management, publishing, production and merchandising by surrounding its artists with the components that can turn their talent into a viable business,” says Burch. “We believe that giving artists the knowledge and support to build a business out of their art is the cornerstone to success.”

Burch started his career working in various positions in film, video and television production before transitioning into the music arena. He worked at NBC in the Music Services Department as music coordinator. He moved on to Bunim-Murray Productions where he served as music supervisor for multiple MTV Real World and Road Rules-related programming including “Real World Seattle,” “Real World Hawaii” and “Real World New Orleans”. He has also served as music supervisor for numerous independent films.

“We work within an ever-changing environment and must adapt constantly to take advantage of today’s many opportunities. In an era where the music industry is seeking new business models, we have chosen not to rely on any one way of doing business but to explore every opportunity on an artist-by-artist basis,” says Neese “We are looking to find new ways of reaching potential consumers while maximizing all current traditional marketing avenues.”