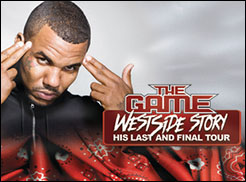 SYDNEY, NSW (CelebrityAccess) — Australian concert promoter Tour Squad is promising legal action after rapper The Game appeared to have scuttled his own tour in the country.

The Game was due to launch a tour in Australia later this month, but the outing has been officially canceled by promoter Tour Squad after The Game took to social media to urge fans not to buy tickets for the 'fake' tour.

The Game, whose real name is Jayceon Taylor, posted via social media last week to say: "This tour is FAKE. I'm not scheduled to be in Austrailia [sic] until 2018. And it will not be my last tour."

According to Australian news source Stuff, the Tour Squad initially suggested that The Game's account had been hacked, but pulled the plug on the tour officially on Wednesday morning.

"Despite our best efforts to try and salvage this tour, there has been a substantial amount of conduct together with statements made by The Game’s team which showed that they had no intention, for whatever reason, to adhere to the contract executed in June 2017 for this tour. It is disappointing for everyone involved but we must protect the integrity of the Australian and New Zealand industry, our business name and brand, our team and our business partners and in doing so, we have to make the right call at the right time. We have taken timely steps and made decisions to limit the losses to all who have been involved and contributed to the tour. We have exhausted all available avenues and yesterday we had to take legal steps," a rep for Tour Squad wrote in announcing the cancellation.

"The Tour Squad team together with our lawyer, Matt McCormick met with The Game’s team in Los Angeles in April 2017. We were assured that The Game was committed to this tour in Australia and New Zealand, and Tour Squad was invited to put an offer in writing. That offer was made, the offer accepted and formal contracts were negotiated and signed by both parties. The contractual payments were made by Tour Squad and the tour went on sale to the public with successful sales. Thereafter came certain demands on behalf of the artist, which far exceeded any of the terms agreed to in the contact, and recently there was further conduct undertaken by The Game’s team which raised concerns as to the tour’s advancement."

While a rep for The Game did not respond to a request for comment, he still has a September 22nd date at TheBarton in Adelaide listed on his Facebook tour itinerary.