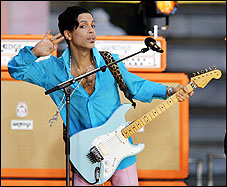 The Wall Street Journal is reporting that a new five-concert series called "Social" will debut in East Hampton, N.Y., in July, with a pass to all five shows costing $15,000 (That’s work’s out to $3,000 a concert, but tickets are not available for individual shows.)

The WSJ wrote “The series is a new extreme in the concert industry's increasing attempts to woo big spenders. But it also reflects promoters' attempts to cash in on demand that's pushed prices on ticket-resale sites like StubHub to the stratosphere. This way, promoters can price tickets at the same level — and keep the money for themselves.”

The Social lineup will include Prince, Billy Joel, Dave Matthews, Tom Petty and James Taylor. Bulldog says it sought mainstream artists with the help of former Warner Bros. and DreamWorks record executive Michael Ostin. You do get something for your 15K. Artists will exhibit, celebrity chefs will cook, parking will cost nothing and seating will include daybeds, ottomans and Moroccan pillows. Social will be marketed as a lifestyle, says Bulldog, to Wall Street executives, Hampton’s socialites and the ultra rich.

In the past other music festivals have introduced luxuries for their VIPs, but not at 15k a ticket. Lollapalooza now offers cabanas on Lake Michigan and mint-infused cooling treatments; and in Washington state, Sasquatch this year offered a $500 festival pass that comes with hot showers and air-conditioned bathrooms.

But Joe Meli, Bulldog CEO, says prices are in line with the secondary market. Tenth-row tickets to the Jimmy Buffett concert at New York's Madison Square Garden this September, for example, are being offered for $2,995 on StubHub. Though no one may be willing to pay that much, a buyer from Omaha, Neb., did pay $11,000 for two front-row seats at Elton John's 60th Birthday Bash in March at Madison Square Garden.