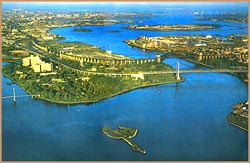 New York City has long been without an amphitheater, the closest one being Jones Beach on Long Island. But that should all change May 1, 2003 with a $40 million, 19,200-capacity shed with 30 luxury boxes being built on Randall's Island, which is between Manhattan and Queens and not far from the Bronx and Brooklyn.

Manager¹s Cliff Burnstein and Peter Mensch of Q Prime Management and their partner Kevin McCabe are the builders. Their company, Quincunx LLC, has plans to build amphitheaters in Burnsville, Minn., a suburb of Minneapolis, and Vancouver, Wash. (the greater Portland, Ore. metropolitan area.

McCabe advised CelebrityAccess that there will be 35-45 concerts and 5-10 festivals a year. The venue will be open to all promoters. "We have a good relationship with John Scher (Metropolitan Entertainment Group), and I'm sure SFX will be interested. And there are a lot of ethnic music show promoters that already have concerts at Downing Stadium."

The amphitheater is part of a $250 million renovation that Randall's Island will be undergoing, which will include the $40 million performing arts center and a $60 million water park, an extensive transportation overhaul to include a 4,000-capacity parking lot, ferry and shuttle bus service as well as some highway improvements. Downing Stadium will be partially demolished, but a track will remain.