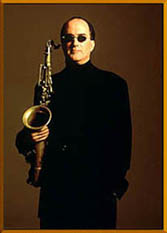 by Bob Grossweiner and Jane Cohen

Over a couple of weeks in June, tenor saxophonist Michael Brecker was reviewed twice in the New York Times. First, for backing up Spinal Tap as part of the Toyota Comedy Festival. The only problem here was that Brecker was not in the city and therefore not at the concert. Could this have been a Spinal Tap joke? Actually, the reviewer was spoon-fed incorrect information from the publicist.

A couple of weeks later, Brecker was at Carnegie Hall and the featured musician in "A Love Supreme — Remembering John Coltrane" with Jon Faddis, Roy Hargrove Quintet and the Carnegie Hall Jazz Band. This time the reviews were real and supreme. And Ben Ratliff wrote in the Times: [Brecker] took Coltrane's role with terrific speed and intelligence, intimidating his power and never replicating his improvisations.

"Brecker played an astounding unaccompanied version of Coltrane's 'Naima,'" he also wrote. "It had been worked on: it was a set piece almost destined for academic study, with rows of rippling arpeggios, streaking melodic improvisations and rich, perfectly formed extreme-register notes."

Brecker's manager, Darryl Pitt of Depth of Field Management, was also taken aback by the performance. He advised CelebrityAccess that he was totally astonished and, as a true hypester, said he thought it would go down as one of those magical moments in jazzlore history. "Mike has expanded the vocabulary of the saxophone and the palate of music."

Newsday's Gene Seymour, in his long review, had this rave: "Saxophonist Michael Brecker came out to play with the orchestra, and he proved throughout the evening to be something of an orchestra by himself, especially on a powerful, densely packed solo rendition of 'Naima' that brought both the house and the band to their feet. The band seemed so stunned by Brecker's audacity that it took a while to recover its storied composure."

MOSCOW AND EUROPE
The eclectic Montreal repertoire has enhanced Brecker's international bookings for the rest of the year through Scott Southard at International Music Network. Flying out of Montreal right after his final performance, Brecker has a special performance on July 4 at Spaso House, the United States ambassador's residence in Moscow. Ambassador James Collins, who was appointed three years ago by President Clinton, is leaving his post, and Brecker is the featured artist, performing his solo repertoire. Afterwards, there will be an old-fashioned jam session with Russian musicians. Then July 5-6, Brecker will perform at the Willis Conover Jazz Festival in Moscow at The Central House of Cinematographers. The first night is the Michael Brecker Quartet (Brecker, Calderazzo, Watts and bassist Chris Minh Doky; the second night is the Michael Brecker Duo featuring Joey Calderazzo.

From Moscow, Brecker hits 13 European jazz festivals July 8-24 as the Brecker Brothers, who unfortunately have no American shows on their itinerary. In early August, Brecker returns to Europe for a few (three booked so far) solo/duet shows.

BACK TO THE STATES
In September, the Michael Brecker Quartet (the same personnel as in Moscow) will play a week at Iridium in New York. From Sept. 19-Oct. 29, Herbie Hancock, Brecker and Roy Hargrove, plus a rhythm section, have 28 U.S. shows billed as "The Directions in Music."

In November, Brecker goes back for some solo/duet performances as well as some American concerts.

To top this off, Brecker has just released probably his most commercial album to date Nearness of You: The Ballad Book (Verve). The personnel include guitarist Pat Metheny, pianist Herbie Hancock, bassist Charlie Haden and drummer Jack DeJohnette. And James Taylor is special guest vocalist on two tracks –Taylor's chestnut "Don't Let Me Be Lonely Tonight" and Hoagy Carmichael-Ned Washington's "The Nearness of You."

The James Taylor tracks have already become radio hits but Verve does not have the rights to release them as singles.