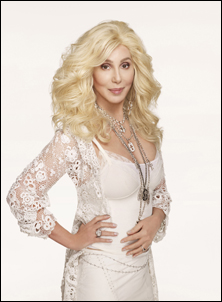 LAS VEGAS (CelebrityAccess MediaWire) — Cher confirmed a rumor that she will headline in Las Vegas at The Colosseum at Caesars Palace beginning May 6 2008.

The performance agreement, which is in partnership with AEG Live, includes approximately 200 shows over a span of three years.

Cher at The Colosseum, designed exclusively for the 4,300-seat venue, will feature chart-topping hits from the artist’s career. The show will be complimented by choreography from Doriana Sanchez, state-of-the-art lighting and special effects and costumes designed by the world-renowned fashion icon, Bob Mackie.

“I started in Vegas at Caesars, so I’ve come full circle,” Cher said. “I’m back and I plan to give my fans the best experience yet. I think everybody knows I only do things in a big way.”

A world famous superstar for more than 40 years, the Oscar and Emmy-winning performer has conquered every endeavor – concerts, recordings, Broadway, TV, movies, film directing and books. Cher has released more than 25 albums and sold over100 million records worldwide in her Grammy-winning solo recording career.

”The fan anticipation leading up to this announcement has been unprecedented,” said John Meglen, co-CEO and President of AEG Live/Concerts West. “Cher’s talent is legendary around the globe and there is simply no one like her. AEG Live is proud to be involved with Cher in a project that once again reinforces Las Vegas as the entertainment capital of the world.”

“Cher’s name in one word encapsulates icon, award-winning legend, and captivating performer. There is only one home for someone of that legendary status- the most recognized casino brand in the world, Caesars Palace,” said Caesars Palace President, Gary Selesner. “Caesars is pleased to welcome Cher back to Las Vegas' most prestigious entertainment address, The Colosseum, joining Bette Midler and Elton John.” –by CelebrityAccess Staff Writers