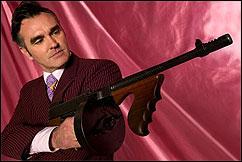 LOS ANGELES (CelebrityAccess MediaWire) — A recent account in the London Times by a tour manager who signed on with ex-Smiths frontman Morrissey of his brief (as in one day) experience on the road paints the iconic musician as a very tough boss.

Andrew Winters wasn't a stranger to the vicissitudes and inclemencies of life on the road with touring bands and before he got the Morrissey gig, he had just spent the previous few months on the road with a pair of UK bands touring in the US. Thus when an email arrived in his inbox asking "How would you like to be Morrissey’s valet for two months across America?" Winters leapt at the chance.

After an email exchange, Winters went to a job interview with Morrissey's road manager, during which Winters was informed that it was as much a check of clothing style and "comportment" as anything else. Winters managed to clear this hurdle and soon found himself hired via email.

Now that he was part of the tour, Winters soon was given a briefing in the basic rules of the road with Morrissey. The foremost was that you had better like vegan cuisine. Winters was strictly enjoined to avoid eating meat while on the tour, no McDonald's, no room service burgers, no slipping off during downtime for a constitution-fortifying steak. They even ordered Winters a vegan meal for his flight to join the band from London to L.A.

Winter's duties for the tour included making sure that the musicians and their gear gets from point A. to point B., that they are on time and neatly pressed in their approved suits and that they were properly fed. He was responsible for making sure that "fragrance spray" was used between the front row and the stage during sound checks (Morrissey's PA was to provide Winters with the fragrance spray of the day if needed) and to ensure that, among other things, Morrissey had "facial water spray" on stage and within easy reach at all times.

Winters was also cautioned that he needed to be interesting when around Moz as he "hates people who are boring" but to take care and not be too "aggressive." After the soundcheck on Andrew's first day on the job, he joined the band and he must have violated this, or one of the other things that are verboten with rolling with the Moz as Winters started work the next day, he was notified by email that his services were no longer required.

Winters claims that he still doesn't have a real sense of why he was let go but his current working theories are based on his musical tastes. He had admitted to liking a Henry Rollins radio show (Moz reputedly eschews Rollins) and Elton John, whom Morrissey deals with sharply in a speech he gives when he plays the tune "The World is Full of Crashing Bores." – CelebrityAccess Staff Writers