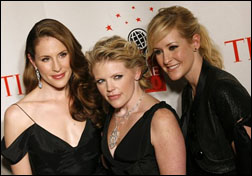 DALLAS, TX (CelebrityAccess MediaWire) — The Dixie Chicks, still on the rebound from a severe backlash against Natalie Maine’s anti-Bush comment in 2003, are ending the year on a high note: five Grammy nominations, including album, record and song of the year.

Despite the recognition and success, country radio stations around the country continue to shun the group by refusing to play their songs, fearing alienated audiences, lower rating and, in turn, less advertising revenue.

Industry surveys keep coming to one conclusion, according to the Dallas Morning News: Country music fans, among the most patriotic of listeners, still haven’t forgiving the Chicks.

“I love the Dixie Chicks’ music, but you have to know your audience and know your marketing model,” Gerry McCracken, country format coordinator for Cox Radio Inc., told the paper.

“Those numbers are off the charts,” McCracken said, referring to research regarding listeners disliking the band. “With those kinds of numbers, we wouldn’t even play George Strait.”

The listener boycott has severely tamed the Dixie Chicks’ album sales as well. Despite debuting at No. 1 on the Billboard country chart and selling more than 1.7 million copies so far, the latest Chicks’ record sales pale in comparison to the more than 10 millions copies sold for each of their previous two releases. –by CelebrityAccess Staff Writers