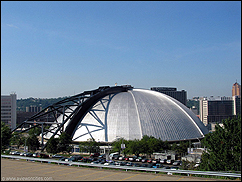 (CelebrityAccess MediaWire) — The Pittsburgh-Allegheny County Sports & Exhibition Authority in Pennsylvania has offered land and development rights to any slot machine casino operator or private investor who’s willing to commit to building a new arena for the area, to house to NHL’s Pittsburgh Penguins.

The SEA Board members unanimously passed a resolution yesterday stating that they would make available the site in the vicinity of Mellon Arena and negotiate development rights to any “qualified group” with or without a slots license willing to make the commitment.

Mayor Tom Murphy issued a statement in support of the SEA’s action, saying, “It is critical that we begin to put the pieces in place to secure the Penguins’ future in Pittsburgh with a new arena.”

“This city needs a world-class, multi-purpose arena complex,” Mayor-elect Bob O’Connor added, according to the Pittsburgh Post-Gazette. “I agree that this effort will require private funding and support from the commonwealth.”

The resolution was timed to coincide with the current December 28th filing deadline with the state Gaming Control Board for parties interested in competing for the license for the Pittsburgh slot machine casino.

SEA Executive Director Mary Conturo said the board wanted to let all potential applicants know that it is willing to work with any of them on a replacement for the aging Mellon Arena, the oldest in the National Hockey League.

The SEA owns the Mellon Arena site, and has a lease with the Penguins to play there until the summer of 2007. –by CelebrityAccess Staff Writers