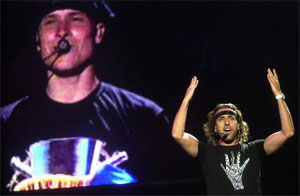 NEW YORK (CelebrityAccess MediaWire) — Special Olympics announced today
that Emma Entertainment and the Backstreet Boys have chosen Special
Olympics to be the charity of choice for the band's concert in Beijing
on Friday, September 24 at the Beijing Olympic Stadium. Moreover, Emma
Entertainment has pledged to partner with Special Olympics Programs
when promoting future concerts and sporting events around the world.

The Backstreet Boys have long been one of the most popular groups in
China. Credited with bringing the band to China for the first time,
Emma Entertainment will offer loyal fans the opportunity to support
the Special Olympics by attending this significant concert event in
Beijing. The band will also perform in Shanghai at Hongkou Stadium on September 26.

The model university project teaches students in physical education
universities throughout China how to train and coach Special Olympics
athletes and as a result, these college campuses become community hubs
for Special Olympics activities.

"Special Olympics is reaching out to youth in new and innovative ways
and with Emma Entertainment's support we are sure to reach more of the
next generation of supporters," said Timothy Shriver, Chairman and CEO
of Special Olympics. "The Backstreet Boys will not only help change
destructive attitudes toward our athletes, but they will help youth
see that Special Olympics is a cool, fun place for everyone."

In addition, the Backstreet Boys will take part in pre-concert Special
Olympics activities and provide complimentary tickets for Special
Olympics athletes, Unified Sports partners, coaches and family members
to attend the concert. The Backstreet Boys will join the many world
renowned ambassadors for the Special Olympics Movement such as Bono of
U2, Jon Bon Jovi, Vanessa Williams, Yao Ming, and Governor Arnold Schwarzenegger.

Jonathan Kane, President of Emma Entertainment said, "We are very
aware of the good work Special Olympics is doing in China and around
the world. We feel privileged and proud to have the opportunity to do
our part and help even more Special Olympics athletes experience the
joy of sports and gain further respect and recognition from society."

George Smith, Managing Director of Special Olympics East Asia added,
"The program in China is the fastest growing program in the history of
our Movement-with the goal of reaching 500,000 athletes by 2005. The
Backstreet Boys will help us change attitudes among young and old,
which will ultimately transform communities by inspiring people to
open their minds, accept and include individuals with intellectual
disabilities, and thereby celebrate similarities between all kinds of people."