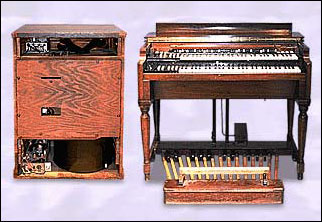 LOS ANGELES (AP) — Donald James Leslie, who created and manufactured a speaker that refined the sound of the Hammond organ and helped popularize electronic music, has died. He was 93.

Leslie died Thursday of natural causes at his home in the foothill community of Altadena, 12 miles northeast of Los Angeles. His body was to be cremated at Cabot and Sons Mortuary in Pasadena on Tuesday, mortuary owner Wendell Cabot said.

Born in Danville, Ill., he lived in Glendale and Pasadena and eventually settled in Altadena.

Leslie was captivated with the sound of the Hammond organ when he heard it at a Barker Bros. furniture store in downtown Los Angeles, where he worked repairing radios. In the store's large showroom, the organ introduced in 1935 sounded much like a theater or church pipe organ.

However, Leslie, was unimpressed with the organ's sound quality in the confined spaces of his home.

He began tinkering with devices to make the instrument sound more like labyrinthine pipe organs, using mechanics and electronics experience he gathered from a series of jobs, including one at the Naval Research Laboratories in Washington, D.C., during World War II.

When Leslie presented Hammond with an organ speaker he had built by hand, the company rejected it – and turned him down for a job.

Leslie later founded Electro Music in Pasadena to manufacture his speaker, which he called a Leslie speaker. It popularized electronic music during the 1940s by improving the sound of organs and keyboards, including those made by Hammond, Baldwin, Kimball and Yamaha.

It wasn't until the 1980s that Hammond eventually bought Leslie's loudspeaker, which is now built by Hammond-Suzuki USA.

Leslie and Laurens Hammond, who engineered the Hammond organ, were inducted into the American Music Conference Hall of Fame in 2003.