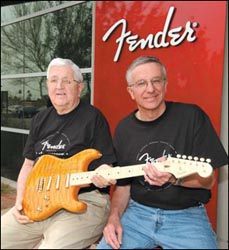 SCOTTSDALE, AZ (CelebrityAccess MediaWire) — William "Bill" Schultz, the man best known for his legendary business turnaround of the iconic Fender brand name, passed away peacefully on Thursday, Sept. 21, at his Scottsdale, AZ., home. He was 80. Schultz's death comes as a result of a 17-year battle with cancer.

In 1985, Schultz led an employee leveraged buyout of Fender Musical Instruments from then-owner CBS Inc. The company, whose products include the Stratocaster, Telecaster and Precision Bass guitars that have been played by musicians from around the world for more than 60 years, was in steady decline under CBS management.

Schultz and his team set out to restore the company's former glory, and in the 20 years under his direction, they took it from a small general office and warehouse in Brea, CA. to its current position as the global industry leader, with state-of-the-art manufacturing facilities in two countries and offices around the world. Schultz also served as chairman of the board for Fender Musical Instruments Corp. In the days to come, the FMIC board of directors will name a successor.

"It is hard to imagine where Fender would be without the vision, passion and belief of Bill Schultz," said William Mendello, the current CEO of Fender and long-time friend of Schultz. "He led one of the greatest turnarounds in American business history, and I will always be inspired by his leadership, his role as a guiding force in the success of Fender, and his unwavering friendship throughout the years."