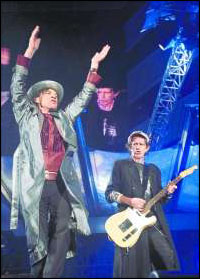 HALIFAX, NOVA SCOTIA (CelebrityAccess MediaWire) — According to The Halifax Herald the City of Halifax made a profit from a rain-drenched Rolling Stones concert just over a week ago.

Scott Ferguson, a spokesman for Events Halifax, predicted Monday the show will be in the black by about $100,000 once all the bills are paid.

Councilor Dawn Sloane called that good news, especially when the City of Moncton lost $671,471 on a similar Stones concert in the New Brunswick city a year ago.

"Although it’s a minor profit, it’s still a good profit when you think of the conditions we had to go under — and that is rain," she told CTV News.

Sloane said the real winners were local businesses, adding the economic spin-off from the Sept. 23 concert on the Halifax Commons was about $12 million.

Halifax Regional Municipality is still tallying the cost of restoring the Commons to what it was before the concert.

Ferguson expects the bill for that work will be in the $50,000 range.

A combination of heavy rain and the estimated 50,000 people who attended the concert caused extensive damage to a corner of the Commons.

Andre Hudon, a spokesman for Montreal-based promoter Donald K. Donald, was lukewarm Monday in his appraisal of the Commons as a future concert destination, pointing out the higher costs of putting on a show in a downtown park versus a stadium.

Deborah Story, a manager for the city, was also cautious about future events on the site.

"The concert was successful, people enjoyed themselves, but there is certainly more than that we will look at . . . to decide where we go from here," she said.