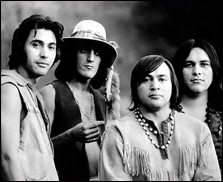 RESEDA, CA (CelebrityAccess MediaWire) — Lolly 'Vegas' Vasquez, one of the founding members of the seminal band Redbone, died on March 4th at the age of 70.

Lolly, who co-founded the band with his brother Pat, played lead guitar and provided vocals and was known for his innovative playing style, including being one of the first musicians to make extensive use of the Leslie rotating speaker effect in his amp setup.

Before helping to found Rebone, Lolly and his brother were active and released singles with a number of other bands, including The Sharks, The Avantis, the Mar-Kets and the Deuce Coups.

Lolly left the band in 1996 after suffering a stroke that left him unable to tour and last year, was diagnosed with stage 3 lung cancer after being admitted to the hospital in the wake of stomach aneurysm, his niece said. – CelebrityAccess Staff Writers