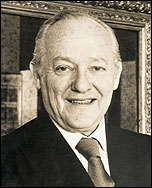 (CelebrityAccess MediaWire) — James M. Nederlander, chairman of the Nederlander Organization, will be recognized at the 58th Annual Tony Awards on June 6 for Lifetime Achievement in the Theatre. The Tony Awards will be broadcast live from Radio City Music Hall on CBS from 8:00-11:00 PM (ET/PT time delay).

With a career spanning more than 60-years in live entertainment, Nederlander has earned twelve Tony Awards and another 25 Tony nominations. He is a producer of distinguished entertainment and the owner/operator of a vast chain of entertainment venues nationally.

"I am truly honored to be recognized by such a distinguished organization and be among a list of such notable recipients," said Nederlander.

The Tony Award for Lifetime Achievement is awarded to those individuals who during their career have provided immeasurable contributions to the theatre and for the betterment of the industry. Nederlander is credited with producing major musicals and plays including musical productions such as Billy Joel and Twyla Tharp's Movin Out, Fiddler on the Roof starring Alfred Molina, Thoroughly Modern Millie, Peter Pan starring Cathy Rigby, Annie, West Side Story, Will Rodgers Follies, Tallulah starring Kathleen Turner, Michael Frayn's Copenhagen, Noises Off and Benefactors. He has also been involved with The Royal Shakespeare Company productions of Nicholas Nickelby, Les Liaisons Dangereuses, Much Ado About Nothing as well as Me and My Girl, The King and I, La Cage Aux Folles, Death and the Maiden, among many others. Nederlander has booked and/or invested in such major productions as Rent, Riverdance, Chicago, Hairspray, Wicked, Sunset Boulevard, Disney's Beauty & the Beast, AIDA, Titanic, Saturday Night Fever, Showboat, among countless others.

The Nederlander Organization is a privately owned and operated business established in 1912 that owns and/or operates more than 29 live theatres and music venues in the United States and England. Generally credited for creating the outdoor amphitheater concept as it is known today, the Nederlander's developed a unique ability to maintain a varied booking approach that responded to a variety of community interests. Currently, the Nederlander Organization books, promotes and produces live entertainment for several of the nation top venues, including the Target Center (Minneapolis, MN), US Bank Arena (Cincinnati, OH), The Grove of Anaheim (Anaheim, CA), Staples Center (Los Angeles, CA), Arrowhead Pond of Anaheim (Anaheim, CA), the Santa Barbara Bowl (Santa Barbara, CA), the San Diego Civic Theatre (San Diego, CA) and the Bakersfield Centennial Garden (Bakersfield, CA). In addition, for the past 29 years, Nederlander has managed, operated and promoted the newly renovated Greek Theatre in Los Angeles.