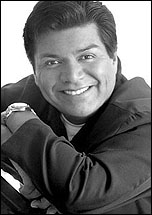 (CelebrityAccess MediaWire) — Showtime is returning to stand-up comedians with George Lopez, who will take center stage for his first solo televised comedy special, George Lopez: "Why You Crying" premiering on May 29 (9:00-10:00pm ET/PT). Showtime was once the leader in showcasing and breaking some of the biggest comedians to emerge from the stand-up comedy world, including Tim Allen, Denis Leary, and Drew Carey to name a few.

Having conquered primetime television with his hit comedy series, "The George Lopez Show," multi-talented actor-entertainer Lopez, who regularly sells out enormous comedy venues around the country, taped the special before a standing-room-only live audience on February 21 at the Terrace Theater in Long Beach, CA.

"I am happy to report that Showtime is back in the comedy special business, and George Lopez is the first in a line up of great specials coming this year," said Showtime Entertainment president Robert Greenblatt. "George Lopez is a brilliant observational storyteller who brings his own family into his comedy and manages to make his storytelling absolutely universal. His show is side-splittingly funny, sometimes politically incorrect, but always from the heart. I think he is at the peak of his game right now, and we're thrilled to welcome him to the new Showtime comedy family."

"I am very excited about my first comedy special being on Showtime," said Lopez. "It's nice to have a home, but I do feel bad that I've pirated cable for the last five years!"

"Why You Crying?" takes Lopez on a cathartic, comedic journey hilariously dissecting his life growing up Mexican in Los Angeles' San Fernando Valley. Along the way he reminisces and riffs about the unique Mexican culture tackling such relatable topics as family relationships, insecurities, sexuality, drinking and language.

There have only been three Latinos in history to carry their own television series: Desi Arnaz, Freddie Prinze Jr., and George Lopez. His ABC-TV series has been renewed for a third season, his "Team Leader" CD was nominated for a Grammy and his first book, "Why you Crying? My Long Hard Look At Life, Love and Laughter," will be published by Simon and Schuster timed to the Showtime special on which it is based.