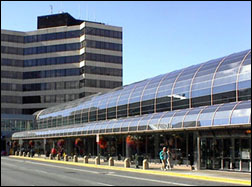 (CelebrityAccss MediaWire) — Ticketmaster and SMG have entered into a multi-year contract to provide complete ticketing solutions for three SMG managed facilities, including the Sullivan Arena and William A. Egan Civic & convention Center in Anchorage and the Carlson Center in Fairbanks, Alaska. As part of the agreement, Ticketmaster will now sell and distribute tickets for each venues' many entertainment, sports and family events beginning May 19 in Anchorage and June 1 in the Fairbanks market.

"SMG is committed to providing Alaskan patrons and guests with the most convenient ticketing solutions available," said Scott Zimmerman, director of ticketing, SMG. "With Ticketmaster, visitors have more options then ever before, from downloading their tickets at home to purchasing online, over the phone, and at outlets across the state."

Highlighted in the agreement are the installations of Ticketmaster's AccessManager products which will enable each venue to validate event tickets in real-time, expedite replacement of lost tickets, monitor event traffic and authenticate event admissions. AccessManager also allows fans to log-on to www.ticketmaster.com and electronically purchase, download and print their event ticket(s) at the click of a mouse using ticketFast electronic delivery, which can be selected during an online or telephone ticket purchase as the chosen delivery method.

"With patrons coming from across the state to attend events in Fairbanks and Anchorage, Alaskans must have the widest and most efficient access to tickets," said Geoff Carns, senior general manager, Ticketmaster Pacific Northwest. "Ticketmaster is excited to bring state-of-the-art ticketing technology and superior customer service to our 50th state."

Ticketmaster will now be the exclusive ticketing provider of some of the most popular events and sports teams in Alaska, including the UAA Seawolves, UAF Nanooks, Alaska Aces and the Great Alaska Shootout. –Jane Cohen and Bob Grossweiner

NEW YORK (AP) — The New York Philharmonic, the nation's oldest orchestra, has decided to solve the acoustic problems at its concert hall by reconstructing the interior.

The Philharmonic is so bothered by the problems at Avery Fisher Hall, in Lincoln Center, that last year it tried to move to Carnegie Hall. Those plans fell apart.

The renovation, which could cost as much as $300 million, also calls for creating a more intimate setting and updating the hall's bars, restaurants and staircases, The New York Times reported in Thursday editions. The exterior will be left intact.

Work would not begin until 2009 and would require the Philharmonic to find another location for one or two seasons.

"We need to make the hall more livable, more attractive," said Zarin Mehta, the Philharmonic's executive director. "There's nothing wrong with bringing it into the 21st century. New York deserves that."

The orchestra and Lincoln Center would share in the fund-raising efforts.

Additionally, Cordova will oversee the promotion of the famed Rockettes, as well as help manage public relations for major entertainment events at Radio City Music Hall and Madison Square Garden.

Cordova has been with Radio City Entertainment for five years, during which time she has devised and executed some of the most high profile public relations programs conducted on behalf of RCE, including the Christmas Spectacular, Sinatra: His Voice. His World. His Way as well as helped manage publicity for major concerts and events, such as The Concert for New York City, The Grammy Awards, The Tony Awards and the MTV Music Awards.

The plan had to be finalized by commissioners Tuesday — or else the $35 million plus $15 million more would have gone to the city of Miami Beach on Dec. 1 for convention centre upgrades. Tuesday's meeting was the last Commissioners meeting before that deadline.

The team has agreed to change its name to the Miami Marlins if the city builds the ball park, which is projected to cost $325 million. The Marlins want to begin playing in the new park in 2007.

The Marlins say they'll commit $137 million to the new ball park's costs. There's still no plan to raise the rest of the money.

City and state funding also will be needed, according to county Mayor Alex Penelas.

(CelebrityAccess MediaWire) — Clear Channel Entertainment has inked a five-year naming rights deal with Southern Ford Dealers, a marketing coalition of 101 Ford dealers in Tampa, Orlando, Jacksonville, the Panhandle and parts of Alabama and Georgia, for its new $23 million, 20,000 capacity amphitheater being built at the Florida State Fairgrounds in Tampa. The new venue will be named the Ford Amphitheatre at the Florida State Fairgrounds. It's the first amphitheater in Central Florida.

Financial terms have not been disclosed. However, a St. Petersburg Times article suggested a fee between $500,000 and $1 million which venue executive director Ed Morrell confirmed to the paper to be in the ballpark.

As part of the deal with Clear Channel, Ford vehicles will be showcased at concerts.

The Los Angeles-based Anschutz Entertainment Group has also promised to use its contacts within the NBA and NHL to lure a franchise from one of the leagues to Kansas City to act as the arena's major tenant, said company vice president Timothy Leiweke.

"I can assure you that there will be an anchor tenant," Leiweke said. "We have had conversations specifically with those leagues' franchises. I don't think there's a better time to get involved with a National Hockey League team than now."

The $225-250 million arena will be called the Sprint Center, after the suburban Overland Park, Kansas – based telecommunications firm, which has agreed to purchase naming rights of the 18,500 to 20,000 seat arena. Terms of the naming rights deal are still under discussion, said Gary Forsee, Sprint Corp.'s chairman and chief executive.

Barnes said the arena will be designed to include retail shops and restaurants that are open even when the arena is not hosting an event.

The National Association of Basketball Coaches will also invest $10 million in the project, and move its headquarters from Overland Park to the facility and open a college basketball hall of fame on site.

Private contributions will cover nearly half of the arena's total cost. The rest will come from assorted tax credits and license fees, including a $1.50 per occupied room per day hotel fee and $4 per day fee on rental cars. Barnes said the project won't break ground until voters approve those two new fees, which will appear on the August ballot.

"So far, these years of effort for a new arena have been a marathon," Barnes said. "But now, we're going to sprint to the finish line."

Barnes said the city will accept design proposals from mid-June until mid-August.

A consortium of several Kansas City-based sports architecture firms – including HOK Sport+Venue+Event and Ellerbe Becket Inc. – have said they plan to bid for the arena's design contract. Also expected to bid is a group led by world-renown architect Frank Gehry.

Anschutz, a Kansas native who hasn't given an in-depth interview in decades, is a graduate of the University of Kansas and the founder of Denver-based Qwest Communications International Inc.

The new arena would replace 30-year-old Kemper Arena, which is located in the old stockyards area west of downtown. For years the exclusive site of the Big Eight and, later, the Big 12 basketball tournaments, Kemper also hosted the NCAA Final Four in 1988.

NEW YORK (AP) — Jazz at Lincoln Center's new $128 million home in the Time Warner Center is designed to be as fluid as the music itself, with stages that can be reconfigured and the city's skyline as a backdrop.

"The whole space is going to be dedicated to the feeling of swing, which is a feeling of extreme coordination," said trumpeter Wynton Marsalis, who also is Jazz at Lincoln Center's artistic director.

The Frederick P. Rose Hall, on the fifth and sixth floors of the Time Warner Center, a vertical mall that opened in February, won't welcome paying crowds until October. But Lincoln Center officials held a news conference in the half-built facility on Wednesday to announce the lineup for the 2004-05 season.

"Our first season in our new home is going to include programs that cover a broad range of artists and styles and span the entire history of jazz," Marsalis said.

Bill Cosby will host "Stand up for Jazz," celebrating the interplay of jazz and comedy.

The New York City Ballet and other dance companies will collaborate with musicians performing new work in the "Jazz in Motion" series.

"We come in the spirit of the down home and the sophisticated," Marsalis said. "You don't have to choose."

The new concert hall, perched atop pricey restaurants and shops a few blocks south of Lincoln Center's main site, will be the first in the world engineered specifically for jazz.

The ceiling at the Rose Theater, the largest of the three performance spaces with a capacity of 1,231, can be dropped, and the room can be "tuned" by adjusting velour curtains and banners, said Chris Darland, an acoustical consultant.

Towers of seats can be moved to offer the choice between "concert in the round" and proscenium theater configurations.

At the two smaller spaces, the Allen Room and Dizzy's Club Coca-Cola, musicians will perform in front of a glass wall providing breathtaking views of Central Park and beyond.

The complex also will include the Irene Diamond Education Center, with events and classes for all ages, and the Ertegun Jazz Hall of Fame, a multimedia exhibit designed by architect David Rockwell.

Uruguayan-born Rafael Vinoly was the architect for the 100,000-square-foot project as a whole.

Subscriptions for the new season go on sale Friday.