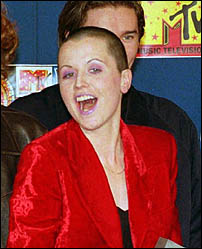 Irish rock group, the cranberries, have terminated
the remainder of their recording contract with MCA Records, a division of Vivendi Universal, effective immediately. They signed in 1991 with Island Records America and transferred to MCA in 2000 following a contract renegotiation. Under the terms of that agreement, the group had one studio album remaining under that contract, but terminated following advice from their legal advisors.

"Since we were signed in 1991 by Island Records, we have gradually seen our label dissolve from a pioneering independent spirited label into a corporate monolith that completely lost touch with the group's creative vision," stated singer Dolores O'Riordan. "All of the people we have worked with over the years (in America and England) have been fired or left the company, so the band felt it was time to move on to new opportunities."

The cranberries have released two albums in the past 15 months selling in excess of 3.2 million albums worldwide. Despite the current downturn within the music industry and little support from MCA in North America, the band has also performed 82 concerts to 600,000 people during that time.

"We have had great fan support throughout the world for many years," added guitarist Noel Hogan. "With little effort from our label, we have been pleased to see top 10 sales in many countries. The band is excited about the prospect of a new beginning, starting fresh, and looking forward to another ten years in the music business. We expect to have a new album released by the end of 2003."

The cranberries are in the midst of celebrating their 10th anniversary as a professional group. Career sales now exceed 38 million albums. The band is planning a tour later in the year, which they hope to confirm in the coming weeks.

The Associated Press – LOS ANGELES — The president of Vivendi Universal's MCA Records has resigned, becoming the latest casualty of the slumping music industry.

Jay Boberg, 44, told MCA employees Thursday that he was stepping down from the post he has held since 1995. He said in a memo to label executives that he leaves a roster of acts that is "an artistic and musical gold mine."

Boberg joined artist manager Miles Copeland in 1979 to found pioneering I.R.S. Records, which was later sold to EMI for an estimated $20 million.

He was tapped to head MCA's publishing arm in 1994 and was promoted to president a year later. MCA was struggling, but Boberg revived the label by bringing aboard such acts as Sublime, Blink 182 and New Radicals.

Jimmy Iovine, who runs the Interscope Geffen A&M division, will oversee the direction of MCA. But Universal Music Group chairman Doug Morris denied speculation that MCA would be absorbed by the larger division.

NEW YORK (AP) — Police believe a shooting earlier this week may have been part of a feud between rival rappers, newspapers said.

On Thursday, at least one gunman opened fire into the reception area of the Manhattan offices of Violator Records and Violator Management, which represents such performers as 50 Cent, Busta Rhymes and Missy Elliot.

Eleven people were in the back of the offices at the time of the incident, but no one saw the shooter or shooters. No one was injured and no arrests have been made.

Police said they did not have a motive for the incident. But newspapers said investigators suspect the shooting may involve a continuing feud between rival rappers.

"It relates to everything that's going on in the industry," one investigator told the Times in Saturday editions.

Newsday reported that police believe Thursday's shooting may have stemmed from a rivalry between rappers 50 Cent and Ja Rule.

50 Cent, whose real name is Curtis Jackson, surfaced as a potential target for violence after his mentor Jam Master Jay was killed execution-style on Oct. 30. The Jam Master Jay shooting is still unsolved, but police have downplayed any suggestion that Jam Master Jay's killers were after 50 Cent.