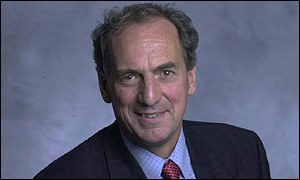 Culture Minister KIM HOWELLS has become embroiled in yet another music related controversy, this time accusing ROBBIE WILLIAMS of aiding international drug dealing and prostitution through his support for music piracy.

The MP, who is developing quite a taste for controversial remarks, launched his broadside at Williams on Monday (January 20) after the £80million star said downloading music from the internet and burning CDs was "great".

"In saying that piracy is a 'great idea', Williams is doing the work for international gangs involved in drugs and prostitution, who find music piracy an excellent way of laundering their profits," the Minister said this afternoon.

In a long, pointed response to Williams' remarks, he added, "I'm appalled at Robbie Williams' statement. He has an £80m contract and probably doesn't worry too much about all those singers, songwriters, musicians and music publishers who depend entirely for a living on receiving honest revenue from sales of their product. Williams should not be defending theft, and this is real theft.

"It is the equivalent of going into a record store and shoplifting the material on sale. I hope that musicians everywhere will condemn his statement."

Howells made his remarks during an online chat with The Guardian today. He said he hoped to "put a few matters right" – a reference to remarks he made just over a week ago when he seemed to blame rap and hip-hop for a rise in gun crime in the UK, singling out So Solid Crew for special condemnation.

"I want to make it clear that it is not rap that I object to, but a small minority of lyrics in songs which glamorise violence, guns, and misogyny," he said today.

"I do not believe that listening to rap is capable of turning otherwise peace-loving respectful individuals into gun-toting gangsters. If that was true then my generation would all be in jail, having been brought up on cowboy movies, some Peckinpah films and Clint Eastwood stroking very big guns. It is the notion that somehow we should ignore this amoral, violent and misogynistic content as, somehow, being perfectly legitimate because it happens to be produced by a particular ethnic culture."