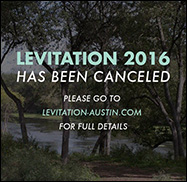 AUSTIN (CelebrityAccess) – Organizers for the Levitation Music Festival and Travis County officials have canceled the event due to the threat of severe weather.

According to local NBC affiliate KXAN, the three-day festival, which would have taken place over the weekend, featured former Beach Boy Brian Wilson as a headliner.

According to KXAX, mud from previous rains and the threat of more rainfall to come made created poor conditions for the festival.

"We’ve been working with county officials trying to find a way to carry on, but at this point the decision has been made, and it is beyond our control. The cancellation is due to dangerous weather conditions in the forecast combined with weather complications to the grounds and the Colorado River.

"We are completely devastated. We have been working for a year, looking forward to this weekend and seeing you all at the ranch. We know that many of you traveled from far away, and that this news is extremely disappointing for everyone," event organizers wrote in a post on the fest's website.

While the event has been canceled, festival organizers have been working to book some of the bands at venues around Austin. A list of rescheduled shows can be found here.