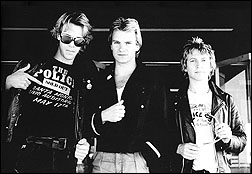 NEW YORK (CelebrityAccess MediaWire) — Rumors about the reuniting of legendary rock outfit The Police are nothing new to anyone who's kept abreast of such things in recent months, however, as Billboard Magazine reported, said rumors have become considerably more substantial.

2007 marks the 30th anniversary of the release of "Roxanne," the single that helped the Police 'make their bones' in the US and according to the a post on Sting's website, detailed discussions have been underway about how the anniversary will be commemorated. "While we can confirm that there will indeed be something special done to mark the occasion, the depth of the band's involvement still remains undetermined." noted the post, attributed to an un-named A&M spokesman. These remarks have fueled speculation that there may be Police dates scheduled in the US and England during 2007.

A Police reunion has long been a very appealing thought to those in the industry. It is projected that they will likely play stadium-sized venues on an international tour. In addition, sources have indicated that there will be DVD releases along with another boxed set, ala 1993's "Message in a Box."

Sting has been reticent about the prospects for a reunion, but other members of the band, drummer Stewart Copeland and guitarist Andy Summers have both demonstrated more zeal in regards to getting the band back together.

"I'm very keen on it." Copeland remarked in a recent interview with Billboard.com.

Members of the band have also revealed that there is at least one piece of heretofore unreleased Police material which may see the light of day. – CelebrityAccess Staff Writers