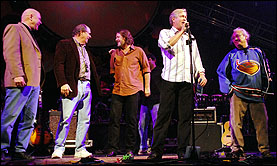 ATLANTA (CelebrityAccess MediaWire) — Widespread Panic celebrated its 15th consecutive sold-out date at the Philips Arena in Atlanta. At the New Year's Eve concert, the second show of a two day stint, area president Bob Williams was on hand along with Sam Lanier from Brown Cat Mgt., and Buck Williams from PGA Progressive Global Agency to help Widespread Panic raise a banner in commemoration of the string of successful, sold out appearances.


Widespread Panic is a popular fixture on the Jam Band scene. Formed in 1985, the band has been touring since on a near-continuous basis since with only one hiatus in 2004. They have a reputation as a true working band, typically doing 250 shows a year and frequently appearing on the list of top grossing touring bands despite not having substantial air play. The band holds sell-out records at Red Rocks (23 shows), Oak Mountain Amphitheatre (17 shows), Philips Arena (15 shows), and UNO Lakefront Arena (18 shows).


Over the years, the band has been prolific, releasing 16 CDs that have sold a combined total of over 3 million units and 5 DVDs. – CelebrityAccess Staff Writers