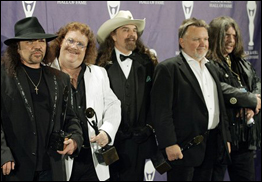 “Billy's hip had continued to give him dislocation problems and it was determined that a revision was the only possible solution,” says Lynyrd Skynyrd manager Ross Schilling of Vector Management.

Billy will be recovering over the next 3-6 weeks and will have to wear a hip brace for the next 3 months. It is expected that Billy will re-join Lynyrd Skynyrd on tour sometime in July. The band will tour with an interim keyboardist in the mean time, while Billy recovers. –by CelebrityAccess Staff Writers