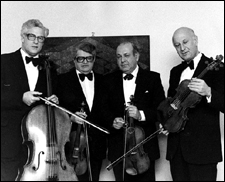 LONDON (AP) — Siegmund Nissel, a violinist who fled his native Germany as a child to escape Nazi persecution of Jews and later helped found the Amadeus String Quartet, has died at age 86.

Nissel died Wednesday at his home in London, his daughter Claire Nissel said. She didn't disclose a cause of death.

Nissel, violinist Norbert Brainin and violist Peter Schildof escaped from the Nazis and formed a deep, enduring friendship when they were in an internment camp on the Isle of Man in Britain during World War II. The fourth was British cellist Martin Lovett.

Nissel was second violinist in the chamber group, which played more than 4,000 concerts. In addition to playing the works of Mozart, the group was known for its interpretations of Beethoven and Brahms.

Nissel was born in Munich, Germany, to Jewish parents from Vienna, Austria, and took up the violin at age 6. His mother died when he was 9 and he and his father returned to Vienna, where he intensified his violin studies.

As the Nazi threat intensified, Nissel was able to escape to England with Kindertransport, a program that sent thousands of children to Britain. His father also managed to flee Austria.

But the young Nissel was interned as an "enemy alien" and spent years in a refugee camp on the Isle of Man, where he befriended Brainin and Schildof, who helped form the quartet.

In his later years, Nissel also taught music at Cologne in Germany and at the Royal Academy of Music in London.