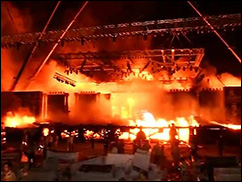 MUMBAI, India (CelebrityAccess) — A massive fire destroyed the stage at a cultural event in Mumbai on Sunday, at Girgaum Chowpatty beach. The event, attended by more than 25,000 people, was part of India's 'Make in India' week and was intended to showcase India's culture to attract foreign investment.

In a video of the event, fire can been seen burning under the stage while a lavani dance performance was underway, and quickly spreads to a blaze that destroyed the entire stage.

Thousands of people, including including high profile politicians and Indian cinema celebrities such as Maharashtra's chief minister Devendra Fadnavis, Amitabh Bachchan and Aamir Khan, were evacuated from the event, but there were no reports of injuries India Today reported.

There appears to be some confusion as to the cause of the fire, with fire officials suggesting that firecrackers that were set off at the venue, while Stage designer Nitin Desai told the Mumbai Mirror, "This was clearly due to a short circuit. I prepared the stage and handed it over at 4.30 pm, and my responsibility ended there. The wiring was done later." Chief Secretary KP Bakshi suggested that a gas leak may have taken place due in pressure cylinders intended to ignitre pyrotechnics may have sparked the blaze.

Event organizer Wizcraft International Entertainment Pvt Ltd has refuted all allegations of negligence and said in a statement that prior to the event, all safety checks and audits were done.

"All fire and safety norms prescribed were followed. We are grateful for the help from the Maharashtra government and Chief Minister Devendra Fadnavis and his team, who stayed at the venue right till the end to ensure the venue was evacuated and reviewed the site in detail post the fire was doused," the statement said.