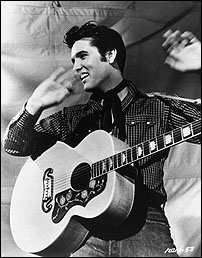 (CelebrityAccess News Service) – On July 5, 1954, Elvis Presley recorded his first record, "That's All Right," at the legendary Sun Studio in Memphis … and rock 'n' roll took off. To commemorate that event and its global impact, Memphis will mark the 50th Anniversary of Rock 'n' Roll in 2004 with a yearlong celebration of rock music and the many streams of music that converged in Memphis to create a truly American sound known throughout the world.

"The many sounds of Memphis shaped my early musical career and continue to be an inspiration to this day," says Timberlake. "I am proud to be part of this effort to honor the legacy of rock 'n' roll and Memphis' place in its history and future."

"The blues and rock 'n' roll have always been closely connected, feeding off one another," said King. "It's that mixing of styles that has made Memphis such a fertile ground for musicians."

"I'm delighted to be a part of this national celebration," said Hayes. "Rock 'n' roll began in Memphis, and the city continues to be a focal point of enormous musical creativity today."

"Having played lead guitar for Elvis' 1954 recording of "That's All Right," it's a thrill for me to be a part of this historic celebration," added Moore.

For the anniversary, Memphis will host a series of major events throughout the year. One of the highlights of the 50th Anniversary celebration will occur on July 5 – 50 years to the day when Elvis' "That's All Right" was recorded. On July 5, Memphis will be the focal point for a "Global Moment in Time" – a moment at which radio stations across the world will be encouraged to simultaneously play "That's All Right." This will hopefully mark the largest playing of a single song at the same moment in history.

Additional events planned for 2004 are:

— "Countdown on Beale" on New Year's Eve will focus on the 50th
Anniversary of Rock 'n' Roll and serve as the kick-off event for the
celebration throughout 2004;

— Elvis' birthday is January 8, and there will be a number of events
surrounding this day;

— Other major events and activities in Memphis on July 5th will draw
attention to Sun Studio on that historic day;

— Elvis Week occurs August 7-16, and it will be themed around the
50th Anniversary of Rock 'n' Roll; and
— FedExForum, Memphis' new arena and home to the Memphis Grizzlies of the
NBA, opens its doors in September. FedExForum will be a
state-of-the-art, 18,000+ seat, sports and entertainment venue, which
will feature a uniquely Memphis music theme.

Memphis is known worldwide as the "Birthplace of Rock 'n' Roll" with close to 20 percent of the earliest inductees in the Rock 'n' Roll Hall of Fame having come from within a 100-mile radius of Memphis.

In addition to Sun Studio, Memphis is home to many other musical landmarks that add to its powerful history — the Stax Recording Studio, where Otis Redding recorded his famous "Dock of the Bay" and now home to the Stax Museum of American Soul Music; Graceland, the Home of Elvis Presley; the famous Orpheum Theatre; Beale Street, the musical entertainment district and home of the famous B.B. King's Blues Club; the popular Gibson Guitar Factory; and the Smithsonian Rock 'n' Soul Museum, which showcases the chronology of the rebellious talent that helped shape the sounds of Memphis.