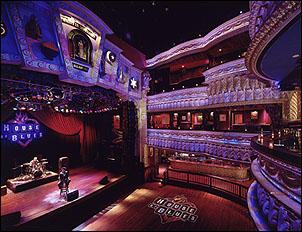 Ten years ago on Thanksgiving weekend, Chicago's House of Blues opened its doors with a concert befitting its name. Some of the performers who took the stage on Nov. 24, 1996 were James Brown, Junior Wells, Buddy Guy, Charlie Musselwhite, Lonnie Brooks, Eddie Floyd, Billy Branch and the Blues Brothers (Dan Akroyd and Jim Belushi).

In the ten-year history, the blues have been only part of the story at the 1,465-capacity, 55,000-square-foot club just north of the Loop. DeRogatis wrote “that under the direction of talent buyer Michael Yerke, a lifelong resident of the Northwest Side and a veteran Chicago concert promoter, the club has become a welcoming haven for a wide variety of artists, including many on the cutting edge of hip-hop, extreme metal and punk that had a hard time finding others places to play. Because of this — and despite its touristy, shopping-mall ambience — the House of Blues has become a vital part of the city's music scene.”

"When they hired me, one of the coolest things was that they said, 'Look, dude, you can book anything you want. In fact, we want you to book as wide of a variety of things as possible that you think will do business in here, because you're trying to fill this club seven nights a week,' " The Chicago Sun-Times quoted the 42-year-old Yerke. "I was not going to do that if I only targeted the adult-urban audience, and one of the coolest things still is that there is practically a different audience in here every night. You might have Common in here one night and Mat Kearney the next, followed by John Mayer or a death metal show. That's what keeps it fresh and exciting, at least for me."

The House of Blues corporation was launched by Isaac Tigrett, who had earlier been a founding partner in the Hard Rock Cafe chain, utilizing money from celebrity investors such as Akroyd, Belushi, Carly Simon and the late River Phoenix, according to the paper. Tigrett left the Hard Rock venture in 1988 after its stock went public, and he opened the first House of Blues as a 280-seat juke joint in 1992 on Harvard Square in Cambridge, Mass. Larger clubs followed in New Orleans and Hollywood in 1994, with Chicago, arguably the most important launch in the chain's history, coming soon after.

"This is the biggest club I'll ever do," Tigrett told the Sun-Times in 1996. "This is a new opera house for Chicago, because blues is the original American operatic music." Indeed, Tigrett based the design of the venue — constructed at a cost of more than $20 million in what had been an oddly shaped television studio beside Marina City's landmark "corn cob" parking towers — on the model of the Tyl Theatre, the legendary opera house in Prague, where Mozart premiered "Don Giovanni" in 1787, according to the Sun-Times. Tigrett also added his own style by decorating the walls with hundreds of pieces of Southern folk art by legends such as Howard Finster, Mose Tolliver and Prophet Blackmon.

"I couldn't tell you all the artists on the wall or what pieces are there," Yerke told the paper when asked about that particular club trademark. "But I will tell you that I'd been working here for about eight months, 80 hours a week, during that first year of trying to get the place up and running, and one night I finally went to a show somewhere else. I'm not trying to slight the competition, because Metro is a really good venue, but I noticed something was odd, and I was wondering, 'What's different?' Then it hit me: 'Black wall on my left, black wall on my right, black wall behind me, band in front — no art!' And I really missed it."

Many music fans may or may not appreciate the art or care about the club's soul-food-cuisine restaurant, neighboring House of Blues Hotel or souvenir shop; but they will appreciate the quality of the sound and the bookings. In these regards, the club has garnered a steady reputation as one of the best-sounding venues in Chicago, and has hosted plenty of marquee performances, from several intimate gigs by the Who to Kanye West's first hometown show celebrating the release of "The College Dropout."

"Three times with the Who and then Pete Townshend's solo show — those were definitely among the highlights," Yerke told the paper when asked for his personal list of the club's most memorable evenings. "Pearl Jam at the Hurricane Katrina Benefit with Robert Plant was amazing; seeing an arena-level band playing in your room and just going, 'Wow! How good are these guys?' Then there are other times where you saw someone come in their first time through town, before they became a really big act: Linkin Park and John Mayer. And of course, seeing legends like James Brown, Ray Charles, Aretha Franklin, Al Green, having an opportunity to meet them and have them play here, that's pretty cool."

Upon the club’s opening in 1996, local promoters accused Tigrett of not really caring about local concertgoers, claiming that he was just building the House of Blues into a big national chain a la the Hard Rock in order to eventually sell the company for a hefty profit.

That sale finally came last summer at a point when House of Blues had grown to include 10 clubs and eight outdoor amphitheaters in cities across the U.S. and Canada. The company was purchased by the even bigger national concert chain Live Nation for $350 million, but the new owners maintain that they will continue to offer a quality experience in all of the cities where they currently operate, in addition to expanding even more.

"This will really help us accelerate our plans to enter into that small to midsize music venue business," Live Nation CEO Michael Rapino recently told Billboard magazine. "We will absolutely be able to provide the resources to help them achieve their vision of taking House of Blues clubs around the world."

Global corporate expansion of this kind is rarely good for local consumers, but to its credit, through its first decade, House of Blues allowed Yerke and his Chicago staff to run the kind of club this city wanted and deserved.

Yerke is optimistic that Live Nation will continue that policy with the House of Blues clubs, and he said he has no plans of going anywhere else. "Occasionally, my bosses have talked about different opportunities, and I've turned them down, because my family is here and all my friends are here. I love Chicago, and I love this club."

And, Yerke told the Sun-Times, Chicago concertgoers seem to love the House of Blues as much as he does. "I think from the fan's perspective, our advantage is that the room always sounds great; we have great lighting rigs; it's comfortable and it's always clean, and by and large, our security is pretty nice to people. I'm not saying we've never had anyone who hasn't been rude, but over 10 years and 270 shows a year, I think people have consistently come in and had a very good experience." –by CelebrityAccess Staff Writers