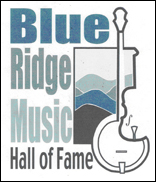 Mike Cross, originally from Lenoir, NC, is a favorite among everyone in the area covered by the Blue Ridge Music Hall of Fame. He has thirteen albums, numerous radio and television experience and has performed at hundreds of concerts from Boston to California. After twenty years of performing, Mike continues to call NC his home while traveling the country playing both guitar and fiddle as well as sharing his own music and stories. His performances have been described as filled with â€œbackwoods humor characteristic of a Mark Twain.â€ George Childers, member of Old Wilkes and BRMHoF expressed joy that Cross would be hosting the induction ceremony saying that â€œMike would be an asset in making the induction ceremony for the charter members extra special as he understands the heritage of the Blue Ridge.â€ Currently, presenters are being confirmed and the program developed. Nancy Watson chairperson of the BRMHoF stated â€œwe are making every effort to ensure that each inductee is honored in the very special way they deserve.â€

The Blue Ridge Music Hall of Fame was created in 2006 to recognize and honor musicians and others who have contributed to the special heritage of the Blue Ridge Mountains sharing and maintaining it as it has evolved since the first American Indians performed their own musical traditions through today. The

Blue Ridge Music Hall of Fame will be housed in the Wilkes Heritage Museum located at 100 East Main Street, Wilkesboro, NC. Wilkesboro is located less than twenty miles from milepost 235, or the halfway point on the Blue Ridge Parkway, easily accessible for anyone wanting to visit the Hall of Fame or Museum.

Charter inductees include: Doc Watson and Earl Scruggs â€“ Nationally known artists from the region; The Carter Family â€“ Pioneer Artist from the region who performed prior to 1950; Tommy Jarrell â€“ Master Musician and/or Tradition Bearer as the semi-professional or amateur musician teaching younger generations how to play traditional music from the region; Dolly Parton â€“ Songwriter from the region; David Johnson â€“ Sideman and/or Session Musician from the region known for work with well known bands performing live or in the recording studio; Ralph Rinzler â€“ Promoter and Organizer or Special Contributor who has either worked with musical events or done something outside the normal musical realm to spread the music of the region; Ralph Epperson â€“ Media and Scholar who shared the music through the various forms of media; Wayne Henderson â€“ Recording and Luthier from the region who has either recorded, produced, or made musical instruments; and Sam Love Queen, Sr. â€“ Traditional Dance which includes any facet of dance by sharing the dance heritage of the Blue Ridge. –by CelebrityAccess Staff Writers